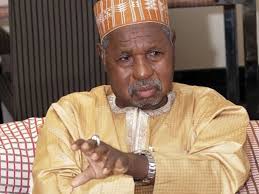 Governor Aminu Masari has urged Katsina State citizens resident in areas prone to activities of bandits to acquire weapons and defend themselves.

Masari noted that it is morally wrong for people to submit cheaply to the bandits without any attempt to defend themselves, according to a statement by his Media Aide, Abdu Labaran,

The governor said this during his visit to Jibia town to condole with the families of 10 people that were recently crushed by operatives of the Nigerian Customs Service (NCS) through reckless driving.

According to him, security is everybody’s business, pointing out that it is not the responsibility of the government alone.

“It is the people’s meek submission that emboldens the bandits to continue with their heinous activities with murderous frequency.

“People must divorce their minds from the mistaken notion that security is government’s sole responsibility alone,” Masari said.

Meanwhile, the Special Task Force charged with maintaining peace in Plateau and environs has warned against any protest over the attacks on commuters in Jos on Saturday.

“In the interest of peace, youths planning any protest over the incident should shelve that plan. There is a curfew in place; no one should attempt to violate it,” Ishaku Takwa, Media Officer of the task force, said in a statement in Jos. He said that information at the disposal of the task force indicated that the protest is proposed to commence from the Jos Central Mosque axis to the State House Assembly premises.

Takwa warned that the 24-hour curfew imposed by the state government in Jos North Local Government Area had not be lifted, hence anyone found wanting would be decisively dealt with.

“Our attention has been drawn to a message circulating on social media calling on Muslim youths to embark on peaceful protest slated for Wednesday, August 18

“The message stated that the demonstration is expected to commence from Jos Central Mosque to the State House of Assembly Complex.

“While we will not want to join issues with the organisers of the planned protest, it is instructive to state that in view of the fragile nature of peace on the Plateau, this protest is unnecessary and uncalled for. We are fully aware that religious leaders have distanced themselves from the planned message. They have categorically stated that they are not in support of the peaceful demonstration. We are, therefore, sending a strong warning to those planning this demonstration and the originators of the message to have a rethink.”