AN OPEN LETTER TO MY EX-OGBANJE GIRLFRIEND 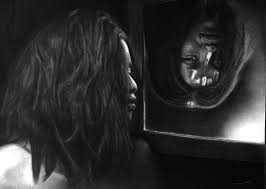 I am deeply sorry for writing this open letter since you appeared in my dream last night where you strongly warned me not to expose some of the secrets you told me about your troubled childhood during our brief relationship.

The first time I saw you at Ikeja Under Bridge bus stop in Lagos, a shock travelled down my spine as if hypnotised by unseen gods. It was love at first sight for me. I was totally carried away by your beauty and shape. As if recovering from a remotely-controlled trance, unable to even speak to you until I pulled myself up as a man.

Maybe by accident of history or just a mere coincidence, we both alighted at Iyana Ipaja bus stop from the Molue bus. I was living at Egbeda-Akowonjo that time and you told me you’re living around Ayobo estate.

I was a fresh but jobless graduate when we met, I did not hide this fact from you. I love you so much then despite my empty pocket. I tried to kiss you once when your love suddenly electrified my whole body system but you cautioned me to relax my mind because all eyes were on you then.
I endured the sadness and regret of not kissing you that first time.

Mopelola, I know you love me, the reason why you advised me not to marry you because your members from the spiritual world won’t allow you to carry my baby.
I wept like a frustrated baby on the day you confessed to me. I can never forget such a sad day until I kiss the dust. My anger boiled like a surging wave against the restive bank of a deserted river.

I attended the University of Ilorin but you attended Lagos State University. I remembered when I visited your Ojoo campus and you dragged me into the forest at the back of your campus for a dialogue which later turned into a monologue.

Mopelola, you vanished for some minutes while in the forest with you. I could only hear your voice but unable to see you.
You later told me you just stepped aside to answer the call of nature in the bush. I accepted your explanation based on trust.

I am not on social media to betray your trust, I still respect you and hope to meet you again in Lagos. I will always cherish the little time we spent together in the 1990s.

Mopelola, you told me you’ll never marry and I was so worried about your future. You used your mouth to confess that your maternal grandmother initiated you to join the spiritual society.

You told me many secrets which I cannot reveal on social media. I am sure you’ll appear in my dream once again over this open letter. I am not writing this letter to hurt your feeling.

Let me assure you today, I will never betray you on social media. You’re still my friend, sister and my first ‘official’ girlfriend. Signed, sealed, confirmed and delivered.

Mopelola, I won’t ask about your marital life since you told me your members won’t allow you to be pregnant for any man. I thought you’re joking with me then until you showed me some proofs.
I was ready to take a bloody risk with you, to marry you ‘by fire, by force’, then wait for your ghost members from the spiritual world to suck pregnancy from your belly.

To be fair to you, I had a nightmare during our brief relationship and your ‘beautiful’ members appeared in my dream, three of them met me while walking along my street and one of them with a long neck exploded like a bomb :

“Leave our precious member alone now, she can never marry you except you wish to die young!”

I took this threat as a serious matter.

Mopelola, I am now waxing stronger every minute with my pen. I am now living in the United Kingdom, you’re free to call it as a self-imposed exile, away from my country of birth.

You predicted this moment during my relationship with you. I also composed many love poems to serenade you out of this planet.

Permit me to recollect those seductive lines…

“Love is a delicate flower and a gentle touch can easily bruise it. I am guilty as charged for loving you with your imperfections, I wish to be sentenced to life imprisonment in the garden of your love. To be in love is to be in bondage, let me be in your captivity till the end of time.”

Mopelola, I love you but unfortunately, I can never marry you. We both separated on mutual agreement. I can still trace your father’s house in Lagos but not sure anybody would recognise me again after over 24 years.

My beloved Mopelola, I will end this open letter here because going further may force me to let the cat out of the bag.

Permit me to quote the foremost Lebanese-American writer, Khalil Gibran, who once said, “If you reveal your secrets to the wind, you should not blame the wind for revealing them to the trees.”

I wish you all the best in life and if you’ve joined your spiritual members on the other side, I hope you can now be allowed to marry any man of your choice with peace of mind.

My sweet Mopelola, my runaway girlfriend, be my guide, protect me against the evil eyes and pull down barriers for me this year and always.

Thanks for reading my long story.

With LOVE From Your Ex-Boyfriend,