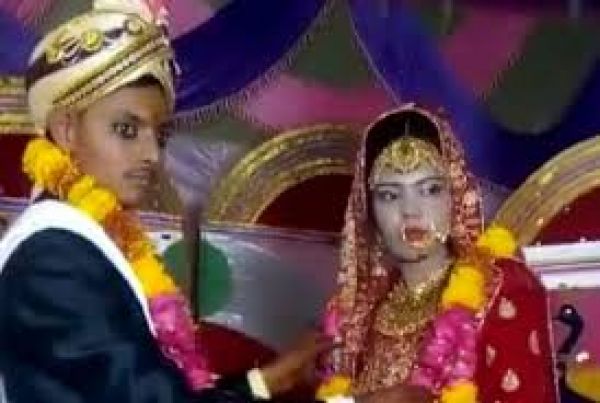 In what can probably described as the weirdest wedding ceremony of 2021, so far, an Indian man ended up marrying the bride’s sister, after his betrothed succumbed to a heart attack during the wedding.

The bizarre incident took place last week, in Uttar Pradesh’s Etawah district. The young bride, Surabhi, suddenly fell unconscious right next to the groom, Manjesh Kumar, right before the ‘pheras’ ceremony, an important ritual in Hindu weddings. The woman reportedly said that she felt unwell and then collapsed. An ambulance was called, but all paramedics could do was confirm the young woman’s death. One would assume that the tragic event would result in a cancelled wedding, but that was not the case here.

Following the tragic death, Manjesh and Surabhi’s families sat down and discussed their options going forward. At one point, someone reportedly suggested that the groom marry the deceased’s sister, Nisha, to which the bride’s parents agreed.

“We did not know what to do in the situation. Both the families sat together and someone suggested that my younger sister Nisha should be married to the groom. The families discussed the matter and both agreed,” Surabhi’s brother, Saurabh, said. “It was a bizarre situation as the wedding of my younger sister took place while the dead body of my other sister was lying in another room.”

As you can imagine, the wedding ceremony was conducted in a very gloomy atmosphere, as Surabhi’s body was literally in the next room. Nisha was said to have accepted the marriage as a duty to her family.

“It was a tough call for our family. One daughter lay dead in one room and the wedding of another daughter was being solemnized in the other room. We have never witnessed such mixed emotions. The grief over her death and the happiness of the wedding have yet to sink in,” Surabhi’s uncle Ajab Singh told reporters.

Share
Facebook
Twitter
Pinterest
WhatsApp
Previous articleOpinion: Such a Dangerous time to be a Student
Next articleMy crush has always been Davido, I would grab a chance to go on a date with him – Maheeda