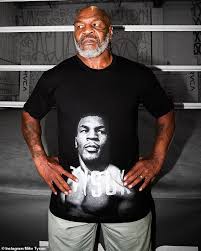 American boxing legend Mike Tyson has said he perceived death is near for him as he revealed personal issues about his wife and money despite being a multi-millionaire.

Speaking on his podcast, ‘Hotboxin’ with Mike Tyson,’ on Thursday, the 56-year-old former heavyweight champion said he felt his time is almost up.

According to Daily Mail, Tyson disclosed that money could not really bring security in what it described as a ‘morbid conversation’ with his therapist, Sean McFarland.

“We are all gonna die one day, of course,” Tyson said.

“Then, when I look in the mirror, I see those little spots on my face, I say, Wow! That means my expiration date is coming close, really soon.”

Tyson said he often has conversations with his third wife, Lakiha Spicer because she believes money will offer her with long-term security when he dies.

“I always tell people — they think money’s gonna make them happy, they’ve never had money before — when you have a lot of money, you can’t expect nobody to love you,” he added.

“You believe that you’re invincible when you have a lot of money, which isn’t true.

“What (exactly) is security?” He asked.

“I don’t know. When you put money in your bank and you get a cheque every week and you can live for the rest of your life, is that security?

“It doesn’t mean you won’t catch a disease, or get hit by a car. Can money secure you when you jump off a bridge?”

In his famous career, Tyson has set a sensational professional record of 50-6-2 with 44 knockouts. He is considered one of the greatest ever to be in boxing rings. Tyson made his boxing debut in 1985. He still holds the world record of becoming the youngest world heavyweight champion.