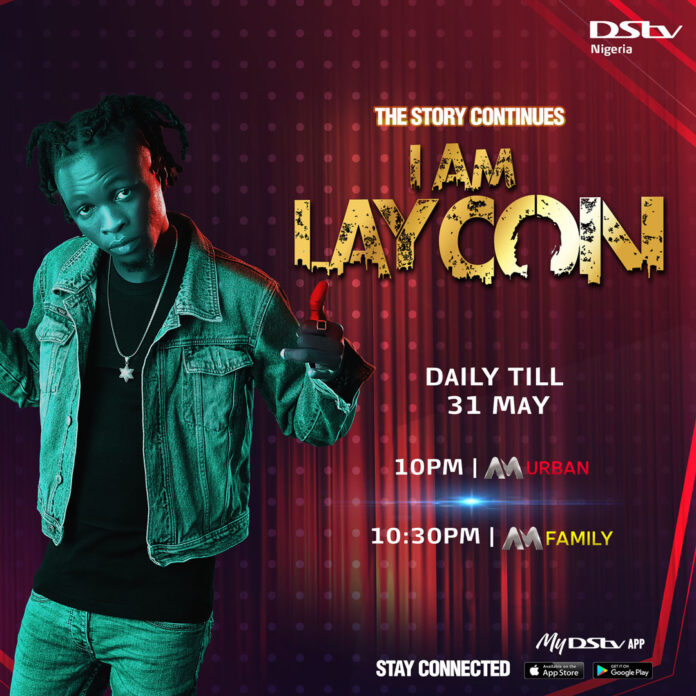 Icons and BBNaija fans! Laycon is back on your TV screens with the Showmax first-ever Nigerian original series, ‘I Am LAYCON’.

The 10-episode series which premiered on Showmax is now available to customers on DStv Premium, Compact Plus and Compact packages on Africa Magic Urban (DStv channel 153) at 10pm and broadcast to GOtv Customers on Jolli and Max on Africa Magic Family (GOtv channel 2) at 10:30pm.

Fans are excited to have him grace their DStv and GOtv screens once again in this exciting series that gives an exclusive look into his life after BBNaija and his newfound celebrity status. Four episodes of the series have aired already and viewers are absolutely ecstatic about the show.

Here are major highlights from the show ;

When Laycon cleared the air on the “Erica topic” – Laycon discussed what happened in the BBNaija house and his relationship with ex-BBNaija housemate, Erica. He explained his strong feelings for her in the house and how it was unreciprocated. He also said his request for space from her was to get over his feelings and how difficult it was being that they were locked up in one house. He also stated that he had since moved on and currently focused on his music career.

Discussions on how his relationship ended after the BBNaija show – Viewers had mixed feelings after he explained what led to his breakup with his ex-girlfriend (Raha). Laycon revealed how he joined the Big Brother show without her knowledge and his decision to end the relationship after the show and focus squarely on his music.

Relationship with friends and close bond with brother, Yomi – The natural vibe Laycon shares with his friends and brother, Yomi, is very evident in the show. The show also reveals how he has been able to maintain a close relationship with his friends from before the Big Brother Naija show. We also saw cameos from celebrities such as, ex-BBNaija housemate Lilo. This got people talking about a possibility of a relationship between both of them.

The importance of music to Laycon – The show revealed Laycon’s strong work ethics and his zeal to succeed in his music career. The show also revealed Laycon’s adjustment to his new celebrity life and new found fame. In an episode, he explained that his major focus is to take advantage of his fame and pursue his music career with vigour. There was an appearance by music celebrity, Joeboy, who came in to talk music and collaboration with Laycon.

The Icon family will definitely increase as more fans fall in love with the BBNaija Lockdown winner as they follow his journey on the show, and honestly, there is so much to love about Laycon.