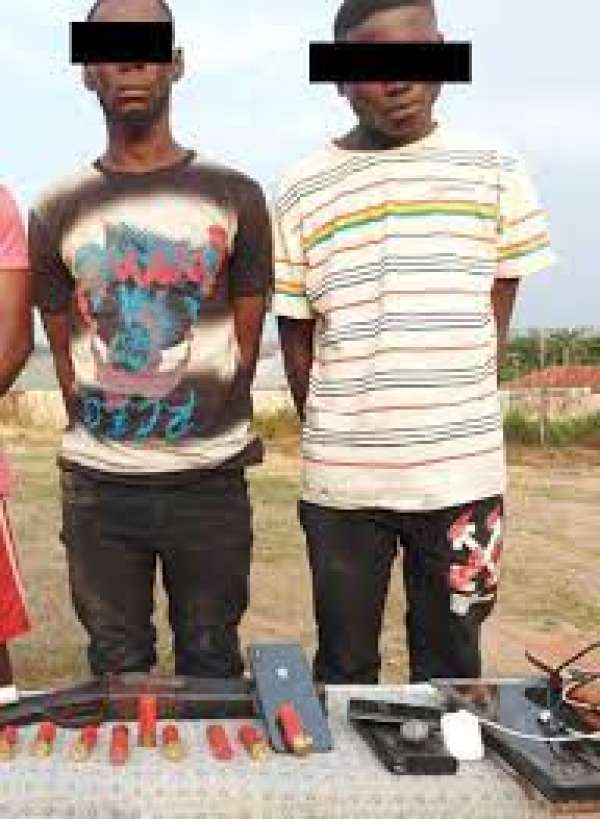 EaglesPath Online reports that operatives of Osun Security Network, also known as Amotekun has confirmed the arrest of two suspects terrorising Okuku and Oyan towns in Odo-Otin local government area of the state.

The suspects, Kehinde Babalola, 23, and Timileyin Afolabi, 18 were caught with local barrel guns with cartridges.

According to Babalola, “I was caught on Monday after I raped a girl at a hostel in Okuku. Before the incident, I usually go to students hostel at night with gun to forcefully collect their phones, money and other valuables.

“I am a truck mechanic and a native of Ogbomoso in Oyo state.”

Also Timileyin, who claimed to drop out of Secondary school in 2017, said he was caught in Oyan by Amotekun operatives after robbing some residents of their belonging.

His words, “I drop out of Secondary school in 2017 because I can’t fund my education. I am 18-year-old. I stole the gun and the bullets from a building and I have been using it to rob”.

Confirming the incident on Wednesday, the Field Commandant, Osun Amotekun Corps, Amitolu Shittu, said the suspects were arrested after they were reported by their victims.

“While Babalola was arrested after raping an under-graduate at a private hostel in Okuku, Timileyin was caught following a tip-off in Oyan. They were both caught with guns, live ammunition and other weapons.

“They will be handed over to the Department of State Security for further investigation”, Shittu said.