NYSC Scandal: Adeosun speaks on judgment but silent on certificate forgery she committed 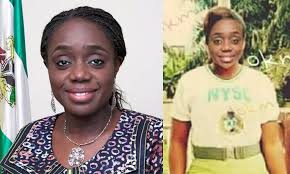 Former Minister of Finance, Kemi Adeosun, on Wednesday, celebrated a court judgment which trivialised her failure to participate in the National Youth Service Corps (NYSC) scheme prior her appointment in 2015.

In a statement, the former minister described the judgment as vindicating her “after a very traumatic spell”, although she was silent on the forgery of the NYSC exemption certificate she was caught to have committed to be appointed minister in 2015.

The judgement, too, was silent on the forgery scandal. This is because the minister who instituted the suit apparently to obtain a judicial clearance did not present it before the judge for a review.

But despite the judgement leaving the forgery allegation hanging around her neck, Adeosun issued a subtle threat to institute a legal action, perhaps against PREMIUM TIMES, whose report exposed the forgery scandal in 2018.

“I wish to add in light of the court’s ruling, I will at the appropriate time and without hesitation, take all further steps necessary within the law to protect my reputation,” her statement read in part.

Taiwo Taiwo, the judge of the Federal High Court in Abuja, said in his judgement, that the former minister did not need an NYSC certificate to be appointed a minister or elected into a legislative house at either the federal or state level.

But the verdict left the more serious allegation that she forged a certificate of the NYSC purporting to have exempted her from the scheme unaddressed.

A PREMIUM TIMES investigative report had exposed how she skipped the scheme and went on to forge a certificate purporting that she was granted an exemption by the NYSC.

She was forced to resign following PREMIUM TIMES’ revelation in 2018.

She admitted in her resignation letter to the President that she realised that the NYSC certificate she presented was “not genuine” after the PREMIUM TIMES report.

She also admitted presenting the same certificate to be appointed the Commissioner for Finance in home Ogun State in 2011.

The judgement given in her favour on Wednesday appears to be at variance with the NYSC law, which stipulates that the one year-long service is compulsory for all Nigerians who graduate from universities or equivalent institutions at less than 30 years of age.

Eligible Nigerians who skipped the service are liable to be sentenced to 12 months imprisonment and/or N2,000 fine, according to Section 13 of the NYSC law.