Professors indoctrinating students? In reality, it’s the other way around – Brian Broome 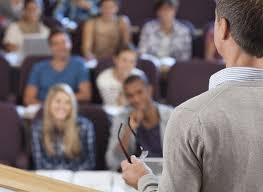 During the first few days of class, my students are silent and nervous. They are college first-years and the class is English Composition. My job is to teach them to communicate effectively through writing. They file in anxiously and choose their seats.

The majority are White and have come from suburbs around Pittsburgh, north New Jersey and Philadelphia. Most are away from home for the very first time.

I try to look the part of an English professor in shirt, tie and jacket with jeans. Professional but not too fussy. This is an insecurity on my part. Many of my White colleagues don’t bother with this sartorial performance and teach in T-shirts and shorts. I feel I have to step it up because of the looks of confusion I have received from my White students when they walk into the room and see a Black man standing there in a T-shirt. They look past me toward the door, waiting for the teacher to arrive. Even when I’m in shirt and tie, some still do.

One day, I ask my class whether I am the first Black teacher they’ve ever had. All but one say yes. My mere presence for many is a lesson.

I wouldn’t say that my White students are racist. They’ve simply never had any meaningful interaction with anyone except for other White people. People who live and think in the same ways that their parents do. This leaves them with preconceived notions that are based in ignorance in this ever-changing culture.

I give my students grown-up essays to read. One can’t learn to write well unless one reads. I make sure that I provide readings from authors of varied backgrounds. We dive into and dissect these texts, and these discussions lead to generative and sometimes difficult conversations. Most of my students have been taught that they should treat everyone the same. They have been taught that the “content of their character” portion of Martin Luther King Jr.’s “I Have a Dream” speech is all they need to know, and that America is a strict meritocracy.

But they live in a world in which they can plainly see that dream is not becoming a reality. We often dismiss the young as being blissfully unaware. They are not. They understand what is happening around them.

One day, as we discussed an essay by the gay humorist and author David Sedaris, a student in the back of the class raised his hand. He said that he related to the essay because he and his boyfriend had been through a similar experience. He paused for a long moment before he said “boyfriend.”

This was an announcement. Every student in the class turned to look at him. They turned to him to see whether his announcement had turned him into something new. Something to be feared. They turned to me to see how I would react. When I did not, they let it go. A few days later, another student introduced her girlfriend into the discussion. Announcements such as these don’t happen in high school.

I have heard the complaints of conservatives who believe that American colleges are indoctrinating their children. I don’t understand this. From where I sit, this complaint is only rooted in the fear that their children might acquire some empathy and understanding.

I am amused why many conservatives believe those of us who teach in college hold such sway over their children. They could not be more misinformed. My students regard me just as they regard all old people: as someone they have to deal with until they return to the company of other young people.

For my part, I can barely get them to read the syllabus.

In short, their children aren’t listening to me, they are listening to and seeing the humanity in each other as they take in the world outside the bubble in which they once lived. They are the ones who taught me about they/them pronouns, not the other way around.

Far from being indoctrinated, most are just opening their eyes. Note to parents: When you send your kids away from home, many of their suspicions about your beliefs are confirmed. They become even more curious about the lives of people who are not like themselves despite your efforts to mold them into younger versions of yourselves. They are merely doing what young people have always done.

Next year, I may relax my dress code just a bit. I may occasionally show up to teach in a T-shirt and jeans and forgo the professor costume. Because my students have also taught me this: I don’t have to play dress up to teach.

Taking a journey into the lives of members of the lesbian, gay, bisexual, transgender and queer community in Nigeria.
Read more
Education

The federal government of Nigeria has instructed that students in Senior Secondary School classes one and two must not write external examinations...
Read more
Article and Opinion

A 53-year-old widower called to complain about a single mother of three he's proposing to marry. He said "she's too independent minded...
Read more