What to know after Day 20 of Russia-Ukraine war 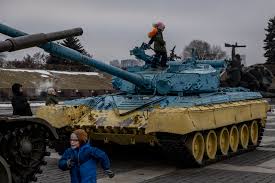 Explosions around the city caused significant structural damage, with shockwaves from a blast tearing through the entrance of a downtown subway station that residents have used as a bomb shelter.

The leaders of Poland, the Czech Republic and Slovenia traveled to Kyiv Tuesday by train in a show of support for Ukraine, despite the potential risks of traveling in a war zone. Janez Jansa of Slovenia described the visit as a way to send a message that Ukraine is a European country that deserves to be accepted into the European Union one day.

The leader of the Ukrainian Catholic Church in the United States appealed to the world Tuesday for humanitarian aid as well as weapons to help Ukrainians fight against Russia’s invasion. Borys Gudziak asked what good does it do to feed the citizens of Ukraine “if their brains are going to be blown out, if their apartment buildings are going to be rendered into rubble?”

WHAT IS HAPPENING IN MARIUPOL, OTHER CITIES?

After days of relentless Russian shelling of Mariupol, an estimated 20,000 civilians used a humanitarian corridor to flee the port city. The route runs west for more than 260 kilometers (160 miles) to the Ukraine-held city of Zaporizhzhia.

Russian troops seized a hospital in Mariupol and took about 500 people hostage during another assault on the southern port city late Tuesday, regional leader Pavlo Kyrylenko said. The soldiers drove 400 people from neighboring homes into Regional Intensive Care Hospital and about 100 doctors and patients also are believed to be inside, he said.

Mariupol had a population of 430,000 before the war. The strategically located city on the Azov Sea in southeastern Ukraine has been under fire for more than two weeks. Local officials estimate the siege has killed more than 2,300 people and said it has left residents, desperate for food, water, heat, and medicine.

In the east, Russian forces blasted downtown Kharkiv with artillery, hitting the city’s historical center, including its main marketplace. Rescuers were pulling the bodies of dead civilians from destroyed apartment buildings.

Share
Facebook
Twitter
Pinterest
WhatsApp
Previous articleCBN is introducing centres to deposit and withdraw cash without going to your bank. This is how it’ll work
Next article10 basic business practices that you can’t afford to learn from your mistakes