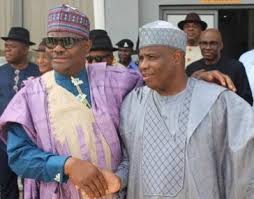 Governor of Rivers State, Nyeson Wike has explained why he is not in support of the 2023 presidential ambition of his friend and political ally, Governor Aminu Tambuwal of Sokoto State.

Tambuwal has also declared his intention to fight for the presidential ticket of PDP to run in the 2023 general election.

But Wike, who also recently declared his presidential his ambition said he stopped supporting Tambuwal PDP had earlier agreed to zone its 2023 presidential ticket to the South.

Speaking on a Channels Television programme, in Abuja, on Tuesday, Wike said, “Tambuwal is still my very good friend. In 2019, I supported him because we zoned the presidency to the North.

“In 2018, all of us agreed that this should be zoned to the North and that was why nobody from the South collected forms for that election and I have no regret about that. What I do not like is for people to deny that there is no zoning or there should be no zoning. That is what I do not like.

“The provision of our constitution is clear under Section 7, Sub-section 3C. It says, there should be rotation of party offices and elective offices. The founding fathers of the party know the complexity, they know the diversity of this country and they made sure that for equity, fairness and justice, this should be done.”

Wike said his decision to contest was, however, not based on the fact that the PDP wants to zone the ticket to the South but because he has what it takes to govern the country.

“In our party, we have always done zoning, so you cannot stop zoning,” he said.