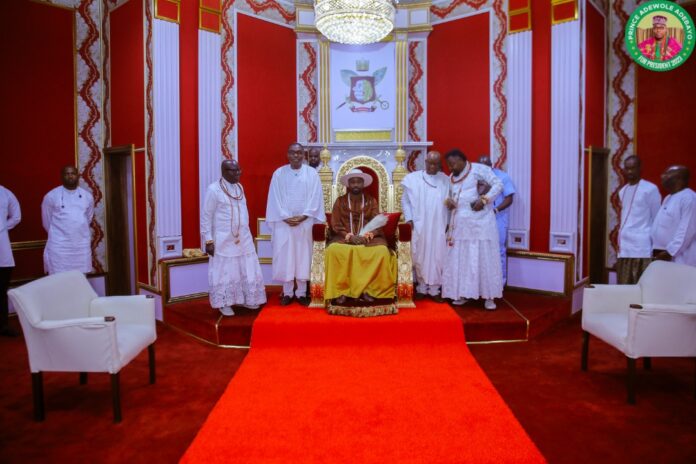 The presidential candidate of the Social Democratic Party (SDP), Prince Adewole Adebayo on Sunday 28th August 2022 paid a courtesy visit to the Olu of Warri kingdom, his majesty Ogiame Atuwase III in his palace. Prince Adebayo was accompanied by his entourage who were made up of, Senator Ugochukwu Uba, former Minister of Youth and Sports Development, Solomon Dalung, former Minister of Education, Barrister Kenneth Gbagi, Chief Godwin Osigbeme and other party faithful.

The purpose of the visit was to seek the permission of the traditional leader to spread his message of hope again for Nigerians to the people of Warri, Delta State. While giving his speech, Prince Adebayo commended the traditional ruler on his leadership and commitment to the advancement of the Itsekiri kingdom and its people. He said Nigeria is grateful to the Ewere nation and the Itsekiri people for the light shown in terms of the culture of the were people, and for the good name the Itsekiri people have given to black people all over the world.
He said he believes that the time of Atuwase the third, will also be the time of development of Nigeria and the development of Nigeria must start from where Nigeria gets the money, which is the oil region.

He noted that the wealth of the people should be managed through the kingdoms especially kingdoms that produce wealth for the country.
Prince Adewole Adebayo stated that the Social Democratic Party (SDP) can contribute truth and justice to the governing process in the country, and the party has the atmosphere on which it can build infrastructure. Speaking further, he said, “The political class In Nigeria, the leaders cannot say that they are going to build real roads big cities do all these wonderful infrastructure that will envy Dubai and parts of the world without first establishing truth which will lead to justice which will lead to peace, because if there’s no peace which is following justice even if we build the tallest buildings in the world, they can be destroyed by people who don’t have the sense of justice”.
Prince Adewole Adebayo noted that Nigeria needs economic transformation.

“Everything that we need is within our grasp and as President of Nigeria, I’ve looked around, I do not have one dollar more to add to the wealth God has given to the Ewere nation”.

Prince Adebayo stated that his reason for joining politics is to be able to seize the opportunity to bring changes into Nigeria, which goes beyond change of words or slogans.

He added that the mission of the Social Democratic Party (SDP) is to be founded upon truth and justice and every other thing will be added with the permission of his majesty, Ogiame Atuwase III, the Olu of Warri kingdom.