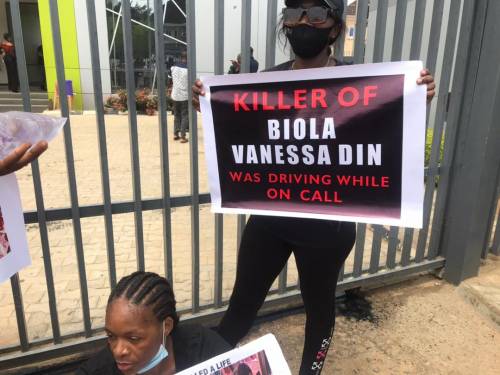 A bank manager with Access Bank in Life Camp, Abuja, Ekod Koko Dan, has been accused of abandoning the family of a 10-year-old girl, Biola Vanessa, whom she crushed to death while driving against traffic in the area.

The tragic incident occurred on Thursday, June 10, 2021, when Vanessa was crossing the road.

She was allegedly knocked down by the bank manager who was said to be making a phone call while driving against traffic.

Ekod Dan was trying to avoid a traffic buildup at the junction ahead and decided to go against traffic.

The little girl was said to have been hit and rushed to the hospital and Ekod Dan left her contact details with them but she hasn’t reached out to the family since then, even via a phone call.

The little girl later died in the process while the mother went to report the matter to the police.

The family members, friends, and neighbours staged a protest at the bank on Tuesday to demand justice and express their anger over the insensitive attitude of the manager, whom they said had refused to show up and sympathise with them.

The child’s mother, who spoke to the media during the protest, said “My daughter went to buy something and was already halfway on the road because it was a dual carriage road.

“The manager of Access Bank, Life Camp branch killed my daughter. She hit my daughter and my daughter went up and hit the ground and (she) crushed her again. On a normal day when you hit a dog or goat, you can swerve.

“When my daughter was rushed to hospital, I went there and held the hand of this woman so that we could pray but she opened her mouth to tell me that she can’t pray.”

Meanwhile, the protesting family members have vowed not to give up until they get justice.