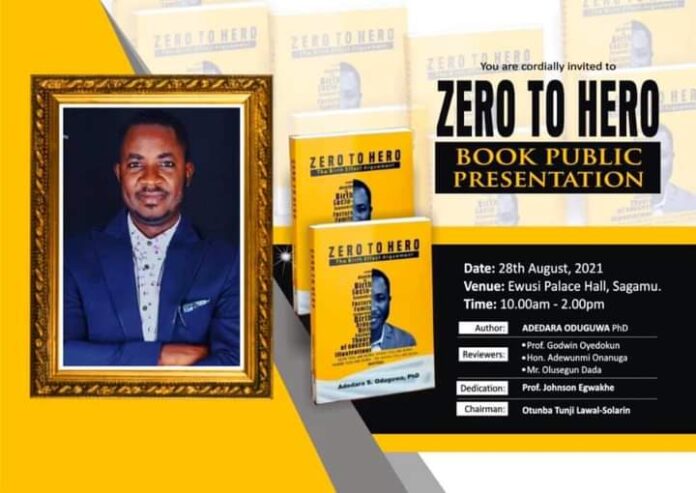 The Akarigbo of Remoland, Kabiyesi Babatunde Ajayi FCA will lead a host of important guests to grace the book launch of multi-sectoral writer and poet, Adedara Oduguwa.

Oduguwa is set to launch his book titled, “Zero to Hero: The Birth-Effect Argument”.

The book was conceptualised after about eight years of observational and empirical management studies. The book cites great examples of how a man’s birthday or birth month will determine how his life pans out with real-time examples.

The book launch, slated for Saturday, 28th of August will be attended by some of the top functionaries in Nigeria, and people of proven qualities across various spheres of human endeavors.

Others expected to grace the book launch are the Chairperson, House Committee on Women Affairs And Social Development, former Director General of NIMASA, Otunba Adewunmi Onanuga, Chairman of pan-Yoruba group Afenifere, Otunba Opeyemi Agbaje and a host of other eminent personalities.

The author has also sought the presence of top traditional rulers in Ogun State including his HRH Oba Oyesola Akinsanya, The Ewusi of Makun (who also doubles as the author’s uncle), HRH Oba Adewale Osiberu, The Elepe of Epe Sagamu, H.R.H Oba M.O. Lasisi Gisanrin, Odofin of Soyindo, HRH Oba Taiwo Taiwo and The Onipara of Ipara.

The author in what fueled his desire to tread on the path of seeking the birth effect said;

“In the wake of 2015, I started a doctoral programme in business administration, with specialization in Human Resources at Babcock University, Ilishan, Ogun State, Nigeria.

“Before this period, I have been functional as a management consultant. I joined the school with the mindset of researching public sector reward management, using the Nigerian Police as a case study. I had previously studied Expatriates’ Reward Management in Bristol, United Kingdom, three years earlier.

“However, after almost completing the research proposal, I said to myself, ‘Dara, what is new in reward management that you would like to teach the world?’ This question kept coming recurrently to mind, until I settled with an affirmative answer ‘absolutely nothing new!’

He however charged Nigerians and anyone seeking to understand their lives better to read the book as they’ll learn many new things, and get to have a better scope of their existence.

Oduguwa dedicated the book to his thesis supervisor, Prof. Johnson Egwakhe, a man he describes as humble, friendly, intelligent, supportive, scholastic, simple, wonderful and determined. He said Prof. Egwakhe saw the end from the beginning and played a huge role the publishing of the book.

The Birth-Effect argument is set to lead discussions into how people take better cognizance of their birth months, and what it gives them as individuals. This is also expected to lead into several mind-blowing discoveries that may change the conducts of humans, and improve behavioural patterns, hence promoting national development.