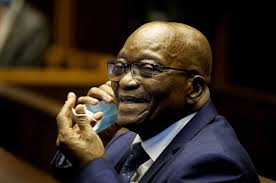 Zuma has been handed a 15-month jail sentence for contempt of court.

The country’s constitutional court imposed the sentence on Tuesday for defying an order to appear at a corruption inquiry.

The disgraced former president failed to appear at the inquiry led by Deputy Chief Justice Raymond Zondo in February.

He has been ordered to present himself to police within five days so he can be committed to a correctional facility.

The inquiry is examining allegations of high-level corruption during Zuma’s period in power from 2009 to 2018.

Mr Zuma denies wrongdoing and has so far not cooperated.

Jacob Zuma is South Africa’s first democratic president to be imprisoned since the ANC came to power in 1994.