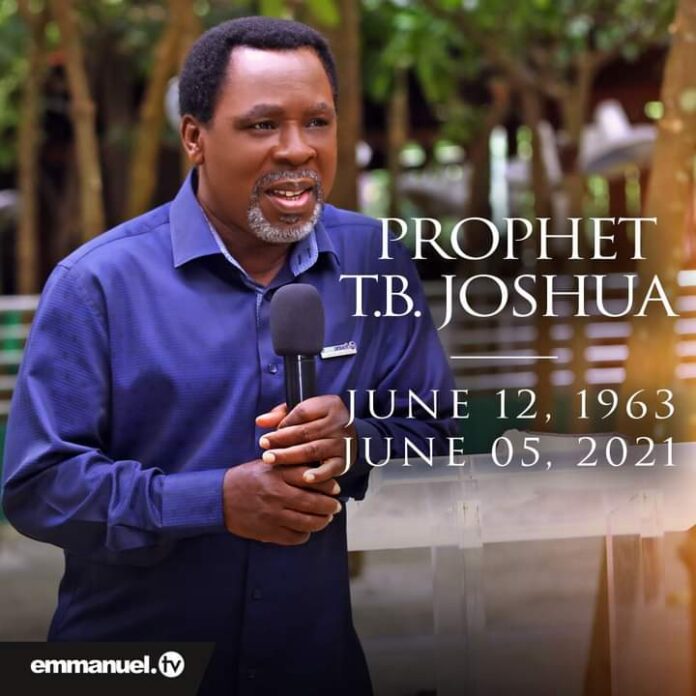 Some youths in Ondo State have called on the government to consider immortalising the founder of the Synagogue Church of All Nations, Prophet Temitope Balogun Joshua, popularly known as Prophet T. B. Joshua, by naming an institution after the cleric.

They also urged the family of the late cleric to bring his remains to his hometown, Arigidi Akoko for burial.

The youths, who are from the four local government areas of Akoko made the call at the weekend during a ‘special walk’ to honour the departed cleric in his hometown of Arigidi Akoko.

Speaking at the procession, the President of the Akoko Youth Forum, Mr. Ifeoluwa Ajibuwa described the late Joshua as a charismatic pastor, televangelist, and philanthropist who devoted his lifetime to the teaching of Christ.

He said the prophet was among the most philanthropic among the sons and daughters of Akoko who ever lived.

While noting that Prophet T. B. Joshua was a blessing to Akokoland, Ondo State, Nigeria and the world at large, Ajibuwa pleaded with the government to bury his remains in his hometown of Arigidi Akoko.

He said, “The man of God was a shining light that has shone on every country of the world thus making Akoko land a place in the hearts of the people around the world.

“Prophet T. B. Joshua was a philanthropist, a role model and mentor to this generation and his message of love and help for the needy made him irresistible among the preachers and televangelists in the world.

“We want him immortalised by the government because it is also the best way to remember him for his impact to the society and the people. He will surely be greatly missed by everyone and all over the world.

“Even, his contributions to the security, welfare and education sector of the state will always makes the vacuum created by his demise unfilled.

“We, the entire youths of Akoko want to make it a clear request to the family of the deceased and those concerned that his remains should be brought home to Arigidi Akoko for Burial.”