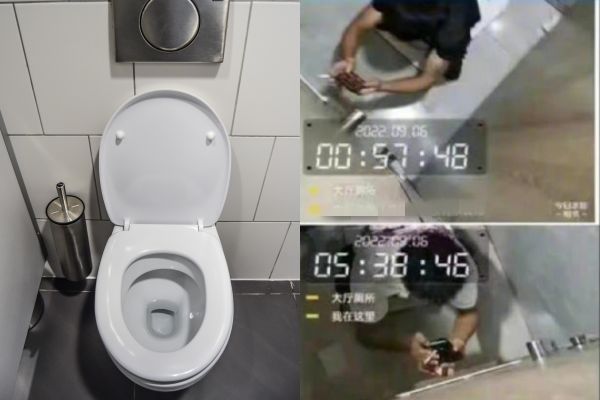 A Chinese company has come under fire for installing surveillance cameras above the toilet booths so it could monitor employees during their toilet breaks.

Toilet use during work hours has been a controversial topic in China for quite a while now. In the past, we’ve written about companies that cut employee salaries for spending too much time in the toilet, others that fined workers for using the toilet more than once a day, and even a company that installed timers on its toilet booths. But none of those examples even come close to the “solution” of one technology company in Xiamen, Fujian Province, which reportedly installed cameras above the booths of its employee bathrooms to monitor phone use during bathroom breaks.

Photos captured from the footage of the bathroom cameras recently made their way on Chinese social media, where they quickly went viral. It wasn’t long until someone recognized the background as the bathroom of China Aviation Lithium Battery Technology Co., Ltd. in Xiamen, a state-owned company specializing in the production of lithium batteries.

The photos circulating online also featured the “corrective measures” allegedly suggested by the human resources department. Apparently, two of the employees were fired, and the third was hit with a severe penalty and had their monthly performance score slashed to zero.

After the photos went viral and news agencies started contacting China Aviation Lithium Battery Technology Co., Ltd. for clarification, the company came out with a statement, admitting that the leaked photos had been recorded by its surveillance system. However, it added that the cameras had only been installed this year, with the sole purpose of monitoring smoking in the company toilet.

It’s true that two of the people featured in the photos appear to be holding lit cigarettes in their hands, but then again, they were all using their smartphones as well. Anyway, the explanation did little to calm spirits on social media. Regardless of the company’s motives, to the vast majority of the public, installing surveillance cameras in the toilet booths was simply unacceptable.

“Oh my God! What about privacy?” one Weibo user asked.

“They treat people like animals, without the slightest respect and humanity,” someone else commented.

The Xiamen Xiang’an District Labor Security Supervision Brigade is said to be conducting an investigation in this case, but legal experts claim that the company needs to be held accountable. The installation of cameras in non-public areas of toilets seriously violates the privacy of employees.