Creating a tribe that will help your business succeed 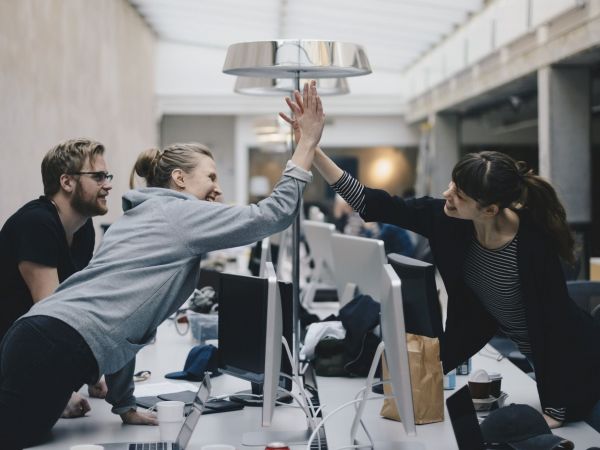 The people around you should inspire you, challenge you, motivate you, and be there for you when you really need them. You’ll know when you find these people, because you’ll want to run ideas by them, brainstorm with them, and look forward to spending time with them. If, however, the people around you are pulling you down or impeding your progress, you need to seek out other people with whom to surround yourself. It’s that simple.

The name Fab Five originally came from what many people consider the greatest recruiting class in sports history: the 1991 men’s basketball team at the University of Michigan. In their freshman year, these players took their team to the NCAA championship, an unprecedented accomplishment. In the same way Michigan’s coach recruited them, you need to recruit and build your own championship team around you.

Make a list of the five people you spend the most time with, outside of your family. If you’re not sure who to include, just look at the numbers you call most often on your mobile phone. Now estimate what each of them earns, total the incomes, and divide by five. The result will usually be really close to what you earn. Crazy, right?

Even if money isn’t important to you, try comparing your Fab Five’s general health status and attitudes toward the people around them (this time, if you wish, add your family to the list). Chances are, you fall somewhere in the middle of the pack. You’re nothing less — and nothing more — than the average of the five people you spend the most time with.

Ask yourself how your Fab Five affect you. Are they pulling you up or pushing you down? If you told your five best friends, one at a time, over coffee or a beer that you were planning to start a business, what would their responses be? Would they be supportive or dismissive? Would they encourage you or try to shoot your idea down? Would they be keen to help you brainstorm? Or would they turn the conversation back to themselves?

Are your Fab Five a reflection of your higher aspirations? This is important because we tend to hang around people whose values are similar to our own. If you want to know why you don’t have more of the things you want in your life, the answer may be as close as those five numbers on your cell phone.

If you want to break through and build a $1 million business, you need a Fab Five who can help you build that business. You need to spend time with people who’ve already built $1 million businesses. Or $10 million businesses, since the people who’ve built $1 million businesses won’t get you to the next level. Maybe you want to build a $1 billion business, but think you can’t get access to billionaires. That’s just an excuse. Pick up a book by Warren Buffett, follow Mark Cuban’s blog, or attend live events with Tony Robbins. Want to be great at social media? Watch a video with Gary Vaynerchuk. You can also follow very successful people on social media, such as Facebook, Instagram, and LinkedIn. Study them, and listen to what they have to say on a regular basis to help drive you toward your goals. You can take advantage of the knowledge and support these very successful people offer even though they aren’t your actual “business team”; their wisdom can help you select the “hands-on” business team that will enable you to grow.

Immerse yourself in the way this core group of people sees the world. Learn how they program their minds. Let their learning and instincts wash over you. If you spend enough time reading and absorbing their material, you’ll start to pick up on how they act, think, and make decisions. Their state of mind will start to rub off on you and might provide you with some “aha” moments that lead up to your next breakthrough.

You may not want to hear it, but you might have to change your circle of friends. If the people you spend the most time with cannot help you get where you want to go, then you need to expand your network and make new friends. That doesn’t mean you have to abandon your old friends, but the ecosystem of the entrepreneur needs a different balance. Finding success is a different pursuit from having fun. The people you feel the most comfortable with — who perhaps are the ones who demand the least from you — aren’t necessarily the ones who’ll move you toward your goals.

When you incorporate new people into your circle, don’t forget to give as well as receive — if you inspire them, they will in turn give more to you. Also, the people in your circle should not be “yes” men or women. People who are 100 percent behind you should still be able to give you some constructive criticism — not doubting you, but making suggestions that may help you.

To move your life to a new level and break through to the next level in your business, you may have to blow away your old universe. The people and thinking that got you this far won’t necessarily get you where you want to go. If they would, you’d be there already.

Using social media to promote your business doesn't have to be hard if you just follow these 8 easy steps.
Read more
Business

Make sure you're responsible for these five activities, and you'll watch your business grow. I often ask entrepreneur CEOs...
Read more