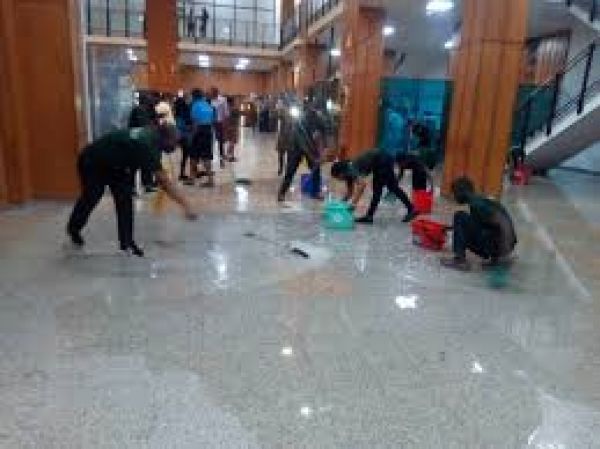 Shortly after the rain started on Tuesday morning, the roof of the National Assembly began to leak, a sight which left many astonished.

It was the main lobby of the legislative complex – between both chambers – that had water dripping from the roof to other parts of the building. The Press Centre, where journalists sit to monitor plenary, was also affected.

The situation did not stop the lawmakers from proceeding with plenary even as cleaners battled to get rid of the water.

Tuesday’s incident comes despite numerous budgetary allocations, amounting to billions of naira, for renovation of the National Assembly complex.

One of such was the approval of N37 billion by President Muhammadu Buhari in 2019 – an act that sparked outrage among Nigerians.

Senate President, Ahmad Lawan, had said the allocation was because there has been no major renovation of the complex for 20 years and “many parts of the complex are dilapidated.”

He had also said the renovation would begin with the chambers and the committee rooms in the White House.

Although some repairs were done in the complex, it is not exactly clear how many committee rooms have been renovated, the level of repairs done and whether the roof was among the items scheduled for the repairs. Tuesday’s incident will, however, cause many to question the judicious use of the amount spent on the renovation.

PREMIUM TIMES also reported how the federal government is pushing ahead to renovate the parliamentary complex with another N42 billion for the purpose of carrying out mechanical and electrical repairs in some parts of the building.

This is separate from the N9 billion in the National Assembly’s 2021 budget which was set aside for “general service.”

It was also reported how the legislative arm increased its budget from N128 billion proposed by the president to N134 billion this year, setting aside N9 billion for general services.