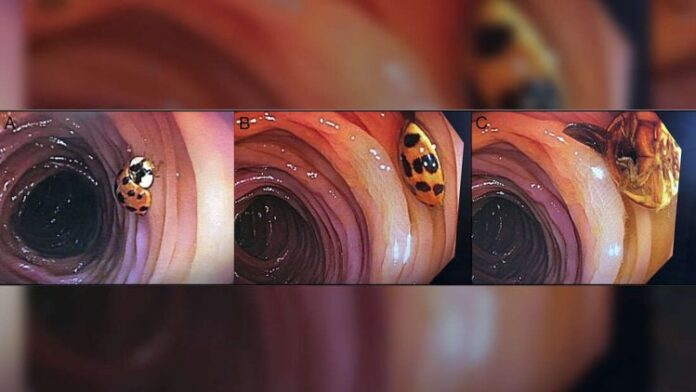 Doctors performing a colonoscopy on a 59-year-old patient were shocked to discover a small ladybug crawling inside the man’s intestine.

I’m no doctor, but I imagine that one of the last things you’d expect to find in someone’s colon while performing a colonoscopy is a living ladybug. How the insect got inside the man’s intestines is one thing, but how on Earth does a ladybug make it into the colon alive? That was the question puzzling the team that discovered the ladybug during a routine colonoscopy in 2019.

While exploring a 59-year-old man’s colon in search of scarring, ulcers or tumors, they noticed a live ladybug crawling on the inside of the man’s intestine.

How the ladybug got into the man’s gut in the first place remains a mystery, but doctors suspect it may have entered his mouth while he was sleeping. As to how it managed to survive his digestive system intact, they believe that it may have something to do with his preparation for the colonoscopy. In order for the procedure to reveal as much information as possible, the colon must be as empty and clean as possible, which involves refraining from eating and purging.

The patient was given a cocktail containing polyethylene glycol, an osmotic laxative used to treat constipation,, which doctors believed may have sped up the ladybug’s journey through the man’s digestive system, seeing it safely all the way into the colon.

The ladybug in question was identified as Harmonia axyridis, which was introduced to North America as a means of pest control back in the early 1900s. The case study doesn’t mention whether the insect actually managed to escape the colon alive.

Interestingly, this wasn’t the first time that live insects were discovered in people’s intestines during colonoscopies. Taking to Twitter, Dr Keith Siau shared several case studies where cockroaches had also been discovered during colonoscopies, which somehow sounds way more disturbing than having a ladybug in there…