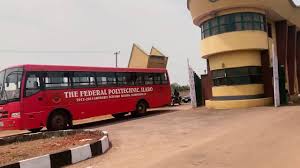 The Management of the Federal Polytechnic, Ilaro has banned students car owners from bringing their cars to the campus henceforth.

This was made known this morning by the Rector, Arc Olusegun Aluko during his interactive session with students car owners.

According to the Rector, the spate of accidents, caused by such students car owners in the town have been causes for concern.

Arc Aluko stated that most of the accidents were reportedly caused by carelessness and recklessness on the part of the drivers who were driving without license, or under the influence of alcohol or drugs.

The Rector however advised such students car owners to obtain driver’s license and submit themselves for drug test in the Polytechnic Medical Centre, if they want to be driving in the town, emphasising however that no student is allowed to bring or drive their cars on the campus henceforth.