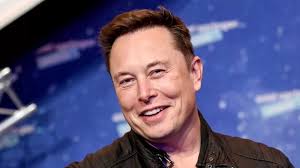 Musk made his comments in response to an assertion made earlier this month by World Food Programme Director David Beasley
Beasley claimed that $6billion would solve the world hunger issue.
Musk, taking to Twitter Sunday, agreed to provide the funds if Beasley could describe exactly how the problem would be solved
He also required that the WFP use ‘open source accounting’ so the public would see ‘precisely how the money was spent’
Elon Musk says he is willing to sell Tesla stock if the United Nations official who said that just 2 percent of the entrepreneur’s income could help solve world hunger can back up the claim.

‘If WFP can describe on this Twitter thread exactly how $6B will solve world hunger, I will sell Tesla stock right now and do it,’ Musk, the world’s richest man, tweeted Sunday.

The Tesla and SpaceX CEO added, however, that the World Food Programme (WFP) must publicly disclose how they are utilizing his funds.

‘But it must be open source accounting, so the public sees precisely how the money is spent,’ Musk added.

Musk’s tweets come in response to a comment made by David Beasley, the Executive Director of the United Nations WFP, urging billionaires to help.

‘The governments are tapped out. This is why and this is when, the billionaires need to step up now, on a one-time basis,’ he said Tuesday during an interview on CNN.

‘$6 billion to help 42 million people that are literally going to die if we don’t reach them. It’s not complicated.’

Beasley continued: ‘This is just heartbreaking. I am not asking them to do this every day, every week, every year. We have a one time crisis, a perfect storm, on conflate climate change and COVID. It’s a one time phenomenon.’

The WFP director’s interview followed a tweet he wrote earlier this month, specifically calling on Musk and Amazon co-founder Jeff Bezos, whose net worths are $311billion and $199billion respectively, to aid in the world hunger issue.

‘Congratulations to @elonmusk for passing up @JeffBezos as the world’s richest person – worth a whopping $221B!’ Beasley tweeted earlier this month.

‘Elon, to celebrate I’m offering you a once in a lifetime opportunity: help us save 42M people from starvation for just $6.6B!! Offer expires SOON…and lives do too.’

Since Beasley’s initial tweet, Musk’s net worth has grown to more than $300billion.

The $6billion Beasley requested would be approximately 2 percent of Musk’s income and less than the $9.3billion his wealth increased on Oct. 29 alone.

Additionally, last week, electric-vehicle company Tesla joined a group of companies that are valued at more than $1trillion.

Musk is now worth over $100billion more than the second-richest person on earth, Bezos.

And on Friday, Microsoft regained its perch as the world’s most valuable company – with a $2.46 trillion market cap – after an Apple share slump saw the iPhone maker’s overall value plunge around four per cent to $2.41 trillion.

This came after Apple fell just under four percent after lower than expected fourth-quarter revenues. Microsoft climbed 1.1 percent to blow past Apple after higher than expected revenue estimates for an 11th straight quarter.

Microsoft is now more valuable than Apple for the first time since early 2020. The company is on pace for its biggest weekly gains since January.

Musk is now worth more than the annual GDP of nations like Egypt, Portugal, the Czech Republic, Greece, Qatar and Finland.

He’s also worth more than the market value of PayPal, the company he co-founded, as well as streaming giant Netflix.

Experts recently predicted Musk would be the world’s first trillionaire, but said the fortune would come from his SpaceX venture, rather than Tesla.