Home Others Everyone's out of cash': Inflation hits Nigeria's internally displaced persons
Others 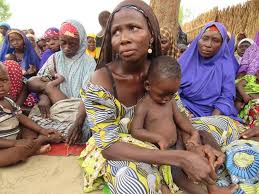 People who fled their homes and lost their livelihoods due to the ongoing conflict in the North-East of Nigeria struggle to put food on the table because of soaring inflation. The inflation rate reached a four-year record high of 18 percent in March this year, according to the National Bureau of Statistics. People displaced by the conflict are among the most vulnerable and are disproportionally affected by price fluctuations.

“Before the prices of things were acceptable. Since they increased, everything has become expensive. And since I sell my merchandise in the camp, I know these people are displaced, the price cannot be the same, as I have to take their situation into consideration,” says Ali Kolomi, who has been displaced with his family of nine, and now runs a grocery shop in one of the camps for displaced people in Maiduguri, the capital of Borno state

Over a decade of armed conflict has left more than two million people displaced in the North-East of Nigeria, making it one of the world’s most complex humanitarian emergencies. As people fled their homes, they also lost their livelihoods and many of them struggle to meet their essential needs.

“Beyond the physical safety, people also have steadily and increasingly been struggling to secure a basic livelihood. Families struggle to find work, care for their loved ones, but also put food on the table,” said Sarrah El Moumouhi, deputy head of Maiduguri sub-delegation for the International Committee of the Red Cross (ICRC).

According to official statistics, 40 percent of Nigeria’s population, or almost 83 million people, live below the country’s poverty line of 137,430 Naira ($382) per year. The ICRC provides microeconomic grants to vulnerable groups of people who lost their income due to the ongoing armed conflict to enable people to start small businesses. However, the steep inflation of the past year has hit them hard and an increasing number of people are struggling to keep their businesses afloat.

Aisha Umar, a widowed mother from Borno State, has been living in Bakassi camp in Maiduguri for the last seven years, following an attack that left her and her eight children displaced. In 2019, she received an ICRC microeconomic grant. Prior to the power outage that affected the city for the past six months, Aisha sold ice.

Electricity shortages have raised the price of ice and she can no longer afford it. As a result, Aisha like many other people who relied on electricity for their businesses has had to find another source of income.

In 2020, more than 16,000 people received cash for investment through the ICRC’s micro-economic grants and 173 entrepreneurs received grants through the ICRC-Tony Elumelu Foundation partnership to start their own businesses.

A military coup attempt was thwarted in Sudan early Tuesday and the situation has been brought under control, said the country's authorities.
Read more
Others

It is, perhaps, with just a hint of satisfaction that the Dutch office for national statistics has confirmed that the men and...
Read more
Article and Opinion

Think it’s all downhill for your brain after you hit 50? Think again. Like a fine wine, some mental skills such as...
Read more