Ex-Militant Recruited to Preserve Nigerian Pipelines He Once Blew Up 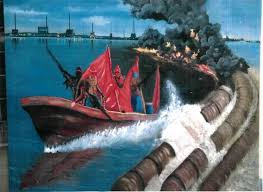 Nigeria’s government has turned to a man it previously pursued as a thief and state adversary, hiring him to combat rampant theft on the oil pipelines he used to blow up.

Nigerian oil production has plunged in the last two years, reaching its lowest level in nearly a half-century. The government blames chronic petroleum theft, pipeline sabotage, and illegal refining, which it claims drains up to a fifth of daily output. To stem the losses, the state-owned energy corporation has engaged security firms affiliated to one of the Niger Delta’s most dreaded former warlords, Government Ekpemupolo.

“We are going to take strong action and stop all criminal activities in the Niger Delta region,” Ekpemupolo, 51, also known as Tompolo, told reporters on September 2 in the Delta state town of Oporoza.

Few people know more about wrecking the Nigerian oil sector than Tompolo, who led a loose coalition of heavily armed insurgents in a push for more local control over the delta’s hydrocarbon wealth beginning in the mid-2000s. Before he and his colleagues accepted a government pardon that handed them lucrative pipeline surveillance contracts and put an end to the bloodshed, their attacks reduced peak production by roughly a third to 2.5 million barrels per day.

That peace ended when President Muhammadu Buhari took office seven years ago, canceling the contracts and renewing battles with Tompolo in particular – he is still classified as a wanted man by the country’s anti-corruption agency as of this week.

However, daily production is now about 800,000 barrels lower than it was during the zenith of the conflict, and the Nigerian government spends billions of dollars subsidizing fuel while earning less than its debt service cost.

At a press conference last week, Mele Kyari, CEO of the Nigerian National Petroleum Company, defended the decision to hire, among others,two companies connected to Tompolo as part of a plan to use private security to protect the vulnerable pipelines that crisscross the delta in the south of Africa’s largest crude producer.

“Contractors were selected through a tender process for people who can do it,” he said on Aug. 30. “Not everyone can do it.”

Tompolo has stakes in two of the companies contracted by the NNPC — Tantita Security Services Nigeria Ltd. and Matton International Services Ltd. — according to his spokesman, Paul Bebenimibo.

“We don’t want to be second-class citizens in this country because we produce the oil that feeds everybody in this nation,” Tompolo said in the Sept. 2 television interview. His argument echoed those made by militants in the late-2000s to justify attacks on pipelines.

Average daily crude production in Nigeria fell to about 1.2 million barrels in July from about 1.9 million barrels as the Covid-19 pandemic struck in the first quarter of 2020, according to data compiled by Bloomberg. The unfolding collapse has left the country unable to meet its OPEC+ quota or to benefit from high oil prices.

Top military officials have disputed the levels of theft advanced by the NNPC and other oil companies, pointing to the firms’ inability to maintain aging facilities or good relations with local communities. But Kyari said Nigeria could be producing up to 700,000 barrels a day more if not for criminals stealing crude and oil companies holding back for fear of theft.

“There is no company that will produce oil and then lose 80% of that and continue to produce the oil,” he said.

Companies injecting into onshore pipelines in the eastern Niger Delta are facing the most trouble. The Shell Plc-operated plant at Bonny, Nigeria’s largest export terminal, received an average of only 42,000 barrels a day in May, less than a fifth of 2020 input, according to government data. Sixty miles away, the Eni SpA-owned Brass terminal has experienced a similar deterioration.

Since June, the 180,000-barrel-a-day Trans Niger Pipeline, one of two that feed Bonny, has ceased transporting oil altogether due to theft. The pilfered haul is either turned into black market fuel at illegal refineries in the delta or barged out to sea for sale overseas.

Now the government is betting on one of the men responsible for a previous production crisis to resolve an even larger dip, despite accusing him in 2015 of being behind a new wave of attacks and seeking his arrest in early 2016 for an alleged 46 billion-naira ($106 million) fraud.

Tompolo told reporters last week that he planned to spread the benefits of the new pipeline security contracts widely in the delta.

“I have been in this struggle for all these years and I know that greed is the cause of all the problems in the country,” he said.