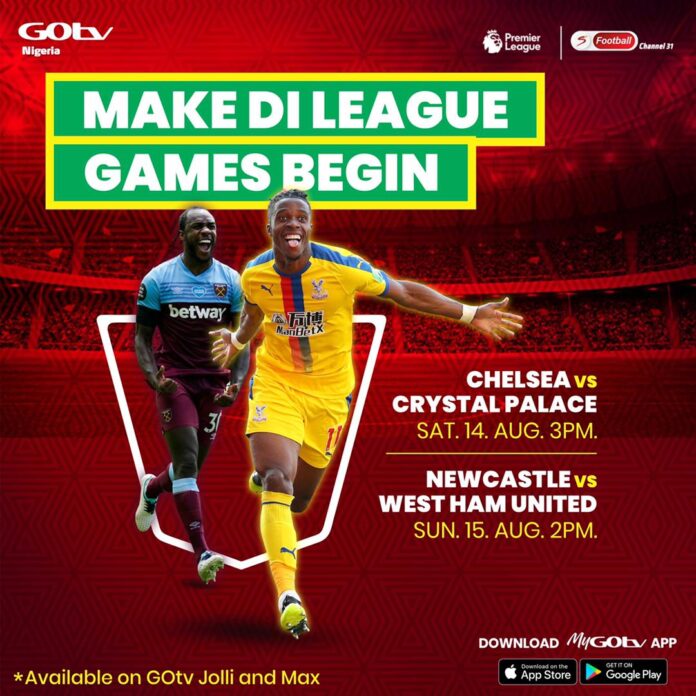 The 2021/22 football season is here and football fans across Nigeria can bank on GOtv to bring all the matches to their TV screens as clubs in the most exciting divisions on the continent battle for honours.

GOtv Max customers will enjoy a robust broadcast of the La Liga and Serie A matches including select matches of the Premier League, UEFA Champions League, Emirates FA Cup and the recently added UEFA Europa League on SuperSport.

Speaking on the start of the football season, Chief Executive Officer MultiChoice Nigeria, John Ugbe said: “We are delivering even more value to our GOtv customers by offering unrivalled coverage of the best football leagues through our SuperSport channels. We are equally excited to bring the thrills from the UEFA Europa League starting this season. In doing so, we have further entrenched our position as the home of football.”

Premier League champions, Manchester City remain the favourites to retain the title; Pep Guardiola’s side are looking to finish top of the table for the fourth time in five seasons after ending the last term with 12 points clear.

However, the UEFA Champions League runners-up are going to face a sterner challenge from Manchester United, Liverpool, Chelsea, and even Leicester City.

United finished second behind City later term and the Red Devils will be looking to go one better than last season after landing England winger Jadon Sancho and France defender Raphael Varane from Real Madrid.

Liverpool couldn’t defend the title they won in the 2019/2020 season as they endured a sustained period of poor form which was compounded by injuries to key players with their prized defender Virgil van Dijk being out of action for nine months.

It was a season of two tales for Chelsea last term; the Blues started on a bad note, which culminated in the sacking of club legend Frank Lampard and the hiring of Thomas Tuchel. The German Manager did not only salvage the season for the club but capped it off with a Champions League trophy.

They finished fourth last term but the Blues have demonstrated their intention to fight for the EPL crown with the acquisition of Inter Milan striker Romelu Lukaku who has replaced Oliver Giroud who moved to AC Milan.

Similarly, Spanish football is back with the new 2021/22 LaLiga season starting on August 13 but the build-up has been overshadowed by the departure of Barcelona captain Lionel Messi.

Barca looked ready to face life after the most important player in their history with their 3-0 victory over Juventus in the Joan Gamper Cup on Sunday but it remains to been seen if they would dislodge Atletico Madrid who piped Real Madrid to the title on the last day of last season.

Ronald Koeman will rely on new players Sergio Agüero, Eric Garcia and Memphis Depay to fill the void and expects Antoine Griezman, Phillipe Coutinho to step up their game.

Despite the return of ‘loanees’ including Gareth Bale and Martin Odegaard, the Real Madrid squad looks weakened with the departure of Sergio Ramos and Raphael Verane and coach Carlo Ancelotti can hope the All Whites can seal a deal for PSG’s Kylian Mbappe on time so as to be able to mount a credible title challenge.

Fans of Serie A can also look forward to an explosive season where Juventus will fancy their chances of reclaiming the title; they lost to Inter Milan last season.

Nigerians will particularly show interest in the exploit of Super Eagles Striker Victor Osimhen who is expected to lead Napoli’s charge for the title.

Osimhen, who was recently signed as a GOtv Max ambassador, headlines GOtv Nigeria’s latest television commercial, which spotlights the player’s journey to becoming a football star.

The TVC also puts a spotlight on the GOtv Biggie Goals promo. The promo offers the GOtv decoder, antenna and 1-month Max subscription at a discounted rate of N6,900 against the previous price of N9,500. Customers who take advantage of the limited time only offer will enjoy over 75+ amazing channels with programming that cuts across sports, movies, local and international series, documentaries, kids and much more. The offer is available at MultiChoice offices and dealer outlets.