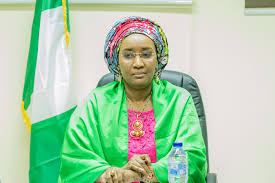 Umar said this on Tuesday in Makurdi at the handing-over of cooking utensils to Local Government Education Authority (LGEA) primary school, Wurukum.

Represented by the Deputy Director, Administration, Mr Ladan Haruna, the minister said that the NHGSFP was designed to lift Nigerians out of poverty.

She said that more than 100,000 cooks were engaged in the the programme across the country.

According to her, the programme, a collaborative venture with the federal government, seeks to boost school enrolment, enhance the nutritional value of pupils and impact the local economy.

She also said the programme had created employment within the school feeding ecosystem in sectors of transportation and manufacturing.

She explained that the ministry had identified areas of improvement to scale up the programme with an additional five million beneficiaries.

According to her, some of the identified areas include a nationwide enumeration exercise with the objective of data verification, upgrading the quality of data and updating existing records to accommodate the scaling exercise.

She also said the programme would undergo review to ensure it fulfilled its objectives.

Sadiya assured the public that the ministry would not relent in its efforts in providing service delivery.

Receiving the items, Gov. Samuel Ortom of Benue said the distrubution of the items would complement his earlier support of cooking utensils worth N400 million to the cooks.

Represented by the Secretary to the State Government, Prof. Tony Ijohor, Ortom said his administration had also trained cooks on personal health and hygiene and COVID-19 protocols.

He said that the trainings enhanced the capacities of cooks to render services and mitigate the incidence of disease outbreak.

The governor pledged to support the federal government in the implementation of its National Social Investment Programmes to uplift Nigerians out of poverty.

A cook under the scheme in Benue, Mrs Dinah Abokyar, commended both the federal and state governments for the programme but pleaded for an increase in the number of cooks to meet the increasing number of beneficiaries.

She also pleaded for the payment of their outstanding wages and an upward review of the allocation to them for cooking to cope with high cost of food items.

On his part, the head teacher, LGEA primary school Wurukum, Mr Batholomy Atsar, appealed to the federal government to include nursery pupils in the feeding programme.