Home Foreign Fish with 'human teeth' caught in US
Foreign

Fish with ‘human teeth’ caught in US 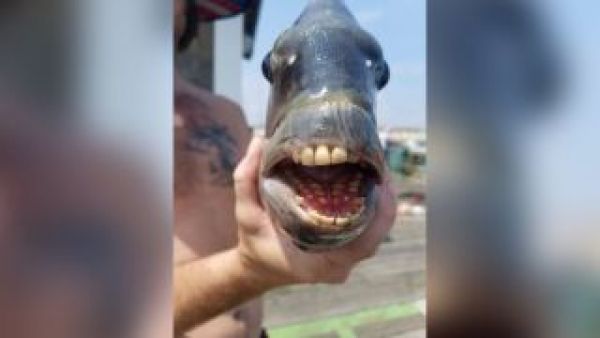 Last week, anglers at Jennette’s Pier in North Carolina pulled up something unexpected — and uncanny — from the Atlantic: a fish with human teeth.

Yes, this fish — and its teeth — are real. But fortunately, there’s nothing human about it.

It’s called a sheepshead fish (Archosargus probatocephalus) — also known as a convict fish for the dark stripes running down its gray body, reminiscent of a stereotypical prison jumpsuit, according to the Maryland Department of Natural Resources. The fish is commonly found swimming along the Atlantic coast, from New York to Brazil, and gave Sheepshead Bay, Brooklyn, its name. They can grow up to 3 feet (91 centimeters) long and dine on a variety of oysters, clams, crustaceans and the odd bit of plant matter.

Like humans, the sheepshead fish has a diverse, omnivorous diet — and, like humans, it has a set of dull, stubby chompers to get through meals. A fully-grown sheepshead fish will typically sport three rows of molars in its upper jaw and two rows in its lower jaw, all the better to crunch through the shells of its prey, according to Scientific American. But it’s the fish’s incisors (front teeth) that look the most humanoid. (They’re even coated with enamel, Scientific American reported.)

“I would not hesitate to swim in waters inhabited by these fish,” Catania told Snopes.com. “They pose no threat to humans unless harassed. Since they are good to eat, sheepshead are targeted by anglers, so the handling of one after capture creates the possibility of being bitten or poked by their sharp dorsal fin spines.”

So, Atlantic swimmers need not worry about explaining any human-shaped bite marks on their butts … at least not where the sheepshead fish is concerned.