Home Others Iran will never get nuclear weapon: Biden blows hot
Others 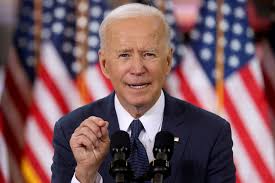 “What I can say to you: Iran will never get a nuclear weapon on my watch,’’ Biden said ahead of the White House meeting.

The U.S. president also told Rivlin, who was due to leave office on July 9, that his country “remained determined to counter Iran’s malign activity and support for terrorist proxies.

This which have destabilising consequences for the region, according to a readout from their meeting.

Biden’s comments came a day after he ordered strikes on sites used by Iranian-backed militia groups on the Iraq-Syria border.

The groups were responsible for attacks on U.S. personnel in Iraq, Biden said.

Negotiations were underway to try to salvage the 2015 Iran nuclear deal.

After the U.S. unilaterally withdrew from the international nuclear agreement in 2018, Tehran turned its back on the limitations the deal placed on its nuclear program.

The Islamic Republic then gradually expanded its nuclear activities in contravention of the agreements and restricted international nuclear inspections.

Diplomats from Germany, France, Britain, Russia and China have been trying to mediate between the U.S. and Iran at talks underway in Vienna since April, aiming to save the nuclear pact.

Former U.S. President Donald Trump, who chose to back out of the deal, and Israel’s former Prime Minister Benjamin Netanyahu, who repeatedly criticised the agreement, had both been replaced and the U.S. and Israel were adjusting their relations.

Israel’s new Foreign Minister Yair Lapid said earlier this week the two countries would fix mistakes made over the past few years, but stressed he had “serious” concerns about the negotiations for the U.S. to return to the nuclear agreement.

The White House on Monday said that Biden extended an invitation for new Prime Minister Naftali Bennett to meet with him soon at the White House.

Biden had reaffirmed that this administration was looking forward to closing collaboration with the new Israeli Government on the many important issues on the bilateral agenda.