Is Osimhen likely to sign deal with Red Devils? 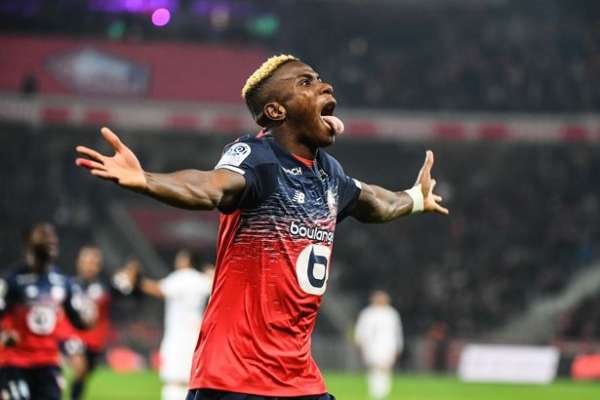 Manchester United are not likely to make an offer for Osimhen in January and may instead look to next summer’s transfer window after the end of the 2022/23 season, according to transfer insider Dean Jones.

Sky Sport Germany had named Osimhen as ‘a potential top transfer target’ for Manchester United looking ahead to the January transfer window.

According to the media outlet, key figures at United ‘see a lot of quality and potential’ in the striker, and have placed him ‘on the list’.

Cristiano Ronaldo and Anthony Martial, who spent last season on loan at Sevilla, are the only out-and-out strikers available to Erik ten Hag at present.

Speaking to GiveMeSport on Wednesday, Jones said that Osimhen would likely cost around £100million, and the transfer guru feels it would be ‘absolutely insane’ if United paid that kind of money in January, considering they had already spent £229million this summer.

As such, he thinks United will have to wait till the end of the current season before they make the move for the Nigeria international

“You’re talking close to £100 million again. United have already spent a quarter of a billion pounds, pretty much, in this transfer window. So that’d be an absolutely insane level of spending if they were to also do that in the same season,” he told GiveMeSport.

“I find it hard to believe they would do that halfway through a season, so maybe we will have to wait until the summer.”

United need a quality striker signing. Ronaldo is 37 now, while there are still question marks over Martial’s level after he was sent out on loan last season.

A £100million deal would break the club’s transfer record, eclipsing the £94.5million they paid to sign Paul Pogba from Juventus in 2016.

Osimhen would also become just the 11th player in the history of football to fetch an 11-figure sum.

The 23-year-old has become highly coveted in Europe as Bayern, Arsenal and Chelsea were also linked with a move for the Napoli man in the just concluded window. In 67 appearances for Napoli, he’s been directly involved in 40 goals, scoring 30 and assisting 10 more.

Osimhen, who was named Serie A’s Best Young Player in 2021/22, boasts ‘infinite’ potential, in the words of his manager Luciano Spalletti.