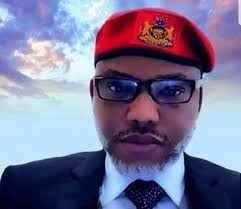 Department of State Services has barred The PUNCH and some media organisations from covering trial of the leader of Indigenous People of Biafra, Nnamdi Kanu, as his trial resumes today.

Also barred along with The PUNCH are The Guardian, Vanguard, Daily Trust, Tribune, Daily Sun, The Cable, and Daily Times, among others.

The DSS did not give reasons for picking 10 media houses while barring others from covering the trial.

A call to the DSS spokesman, Peter Afunnaya, rang out, while a text message sent to him on the action of the secret police had yet to be responded to as of the time of writing this report.

However, a Senior Advocate of Nigeria, Mike Ozekhome, who condemned the decision to prevent The PUNCH and other media organisations from covering the trial, said the position of the law was that every trial should be carried out in public and everyone was entitled to watch the proceedings.

He said, “Our legal system does not admit of secret trials. We are not a country of witches and wizards operating in a coven. For a trial to be free and fair, Section 36 of the constitution says it must be carried out openly and publicly. Banning some media houses from covering Nnamdi Kanu’s trial is not only a sin against Section 36 of the constitution, it also violently offends the provision of Section 22 of the same constitution which gives the media the right and responsibility to ensure that the provisions of Chapter Two of the constitution dealing with the fundamental objectives and directive principles of state policy are upheld and that the government is held accountable to the people of Nigeria.”

Speaking in a similar vein, Remi Olatubora said preventing media organisations from performing their constitutional duty ran contrary to the right to freedom of expression as guaranteed under Chapter Four of the Nigerian Constitution.

Olatubora said, “It is a signal that we are now under a full dictatorship. One serious angle to the barring of a section of the media is whether the trial can still in those circumstances be regarded as trial in the public or a free and fair trial as required by the constitution.”

Also, Boma Alabi said, “Generally speaking, the courtroom is a public space, everyone can come in.

“If it is a contentious trial that people can come in and disrupt proceedings, then the court will make arrangements to ensure that the proceedings are not disrupted. It is within the court’s right to do so.”

A Senior Advocate of Nigeria, Ifedayo Adedipe, also questioned the Federal Government’s motives in excluding The PUNCH, and some other national papers from Nnamdi Kanu’s trial.

He said, “It is obvious that The PUNCH has taken a stand against the oppressive nature of this regime and the government now sees the media house as an unfriendly organisation that they do not want to have anything to do with.

“The facts will speak for themselves, whether some newspapers are excluded or not. Nnamdi Kanu is expected to have a fair and open trial and preventing some media houses from being there will not do credit to the image of the government.

“I will advise The PUNCH and other newspapers to keep their heads up and not be discouraged by this government. Some of the issues usually raised by these newspapers are critical national issues. I believe that it is only people who are beneficiaries of nepotism that will say that this government is not oppressive or discriminatory.”