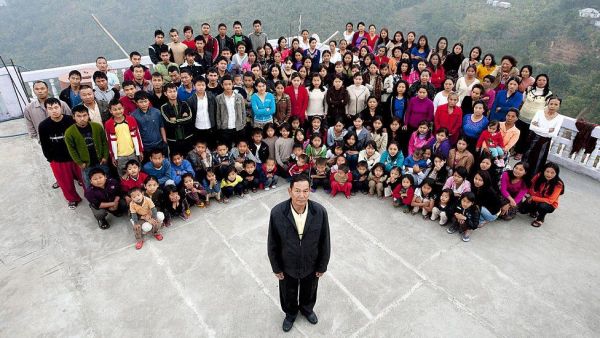 An Indian man believed to be the head of the world’s largest family has died leaving behind roughly 38 wives, 89 children and 33 grandchildren.

Ziona Chana would often forget how many wives and children he had after becoming a household name in the state of Mizoram. His four-storey home in Baktawng village had been a tourist attraction for years.

He died in hospital from age-related health complications at 76. Chana belonged to a sect created by his grandfather which allowed polygamy for men. He married his first wife, Zathiangi, when he was 17. She still runs the show as the “head wife”.

Then he married another woman, and then another. In one year he married ten times. Chana’s last marriage was in 2004 when he was 60. In interviews he claimed to remember the name of every family member but one of his older sons, Lianzuala, once said with a laugh: “That’s not strictly true. He often calls me by my brothers’ names but I understand and don’t even correct him. It’s too much for anyone to remember so many.”

Aside from married daughters who live with their husbands, the entire family live under the same roof at New Generation Home, which is fitted with bunk beds to accommodate everyone and plyboard partitions for privacy.

Chana had a suite with a double bed. His wives took it in turns to share the bed, with a rota designed to ensure parity.

The wives do all the housework while the men look after the farm and the livestock. The family is self-reliant for most things and runs a furniture business for income.

While each individual family unit has its own space, meals are cooked in the common kitchen, which looks like an underground car park. The job is not for the faint-hearted.

A meal of rice and chicken curry involves washing and boiling about 100kg of rice, plucking 30 chickens and peeling 60kg of potatoes. Surprisingly, meals are not staggered. The family eats at the same time.

Making tea for the whole family requires deploying 82 litres of milk, 1kg of tea and 3kg of sugar then launching a logistical exercise of military precision to get it to everyone before it turns cold.