Home Gist Man Holds the World Record for Most Signatures Tattooed on His Back,...
Gist 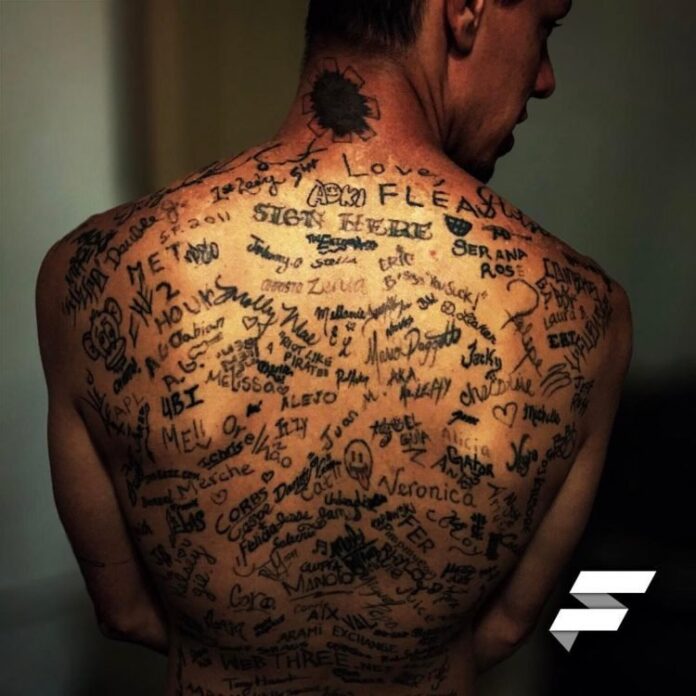 Funky Matas, a social media entertainer based in Florida, holds the world record for most signatures tattooed on the back, including those of celebrities like Will Smith or Gerard Butler.

Funky, real name Juan Matas, used to work as a tattoo artist himself and came up with the project that would end up defining his career as an online entertainer while thinking of a unique project with his body as the canvas. In the end, he narrowed the quest down to two options – turning his back into a MySpace-like form for his family and friends to fill out, or having his friends sign his back with a tattoo machine. The latter was more down his alley, considering his profession, only it didn’t stop with his friends. His family signed his back as well, then famous tattoo artists, and before he knew it, Funky Matas was chasing celebrities and asking them to sign his back so he could then permanently ink it onto his body. His back now has over 225 tattooed signatures, a world record.

“As far as anyone trying to talk me out of it, most people already knew my wild lifestyle and the fact that I never let anything stand in my way. So nobody really tried to prevent anything from happening. I’m pretty hard-headed when it comes to things I want,” Funky said about his epic project.

Funky Matas’ back now features signatures from celebrities like Elijah Wood, Michael J. Fox, Christopher Lloyd and Steve-O, just to name a few, as well as the people behind several iconic characters, like the man who voiced Sponge Bob, or the man who played Darth Vader in the original Star Wars films. Some of them have actually tattooed their signatures directly on Funky’s back themselves.

“If you signed my back it’s because you inspired me in a way or we lived a cool moment together,” Funky said. “Those moments are forever engraved in my head and I will never regret a signature even if that person and I stopped talking.”

In one of his many Instagram posts, Funky Matas explained that even though some people may find his achievement trivial, getting to this point took over a decade and has seen him sneaking into events, being chased by security, and getting refused repeatedly by celebrities. But in the end, it was a journey worth taking, as he managed to achieve his goal.

Even though Funky officially set a new Guinness record for most signatures tattooed on his back at signature number 190, he never really stopped. In 2019, he already had 225 signatures permanently inked onto his back, and reckoned he still had enough space to reach 300. Not sure how many he has now, but I doubt he’d pass the opportunity to get some more big names onto his list.

For more on Funky Matas and his unique tattoo project, keep an eye on his Instagram. For more unusual tattoo projects, check out the man with the most Eminem tattoos, and the artist who specializes in secret tattoos on the roofs of people’s mouths.

Once people start to travel more again, it’ll be important you understand how these nine English words could cause you embarrassment in...
Read more