My intention was to sell the boy for N200,000 — 24-yr-old suspected kidnapper confesses 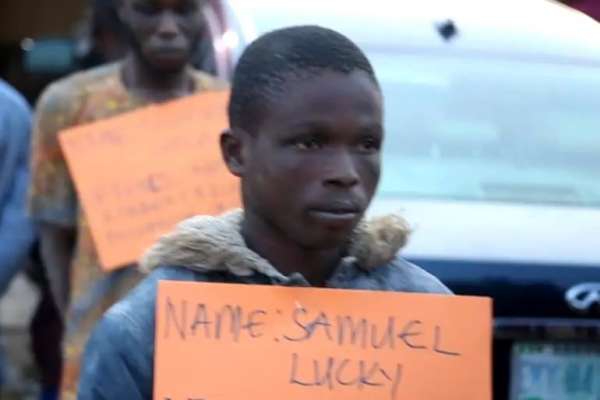 The kidnapper of a four-year-old boy in Akure, the Ondo state capital, Samuel Lucky Akpan has confessed that his intention was to sell the victim for N200,000, EaglesPath Online reports.

Akpa who was arrested by the state security outfit codenamed Amotekun told newsmen when he was paraded in Akure that he needed the money urgently.

According to him ” the man I want to sell the boy too was even waiting for me to bring him when I was arrested by the operatives of Amotekun.

The suspect, who is a friend of the boy’s family was paraded alongside 17 other suspected criminals said to have been terrorizing residents of the state.

According to the suspect, ” The boy always come to play with me from his mother’s shop.

“I was already on my way to sell the boy for two hundred thousand naira, when I was arrested by some group of people.

” The man who wanted to buy the child was already waiting for me because we have concluded on the price and where to bring the child.

” l have already hypnotized the boy by placing the certain substance on his head.

“If somebody places that substance and say some incantations to anyone, the person will not be able to say anything again but will be following him like a sheep.

“I haven’t gone far from the shop of the boy’s mother when I was arrested by operatives of Amotekun.

Speaking on the arrest, the state commander of Amotekun, Chief Adetunji Adeleye said the arrest was “in continuation of the Command’s determination to rid the state of criminals threatening the lives and peace of residents.

He said, “We have arrested someone who kidnapped a-four-year old boy. But with the help of the people around., we were able to rescue the boy and apprehend him.

Adeleye further said that a 27-year-old robbery suspect and cultist who just got out of jail six months ago, Sola Ogunyemi was arrested following a clash with some persons in his neighbourhood.

According to him, the suspect brought out a pistol and threatened the lives of people around the area.

“An English revolver pistol which he claimed belonged to the leader of ‘Eiye Confraternity was recovered from him.

Other suspects apprehended for internet fraud were nine persons whose ages range between 18 to 30 years.

“Over the last two months, we have been on the field and so many criminals have been apprehended.

“As you can see, their crimes range from kidnapping to armed robbery, housebreaking, rape and even Internet fraud.

“We have a number of criminals that are here who are going through different stages of interrogation and awaiting prosecution.

Adeleye promised that the suspects whose investigations have been concluded would be charged to court.