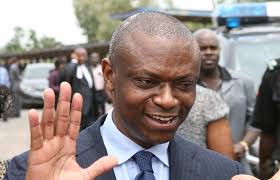 For 12 hours Justice Lateefa Okunnu of Lagos State High Court in Ikeja on Wednesday locked the door of the courtroom against litigants, lawyers, registrars and journalists as she delivers judgement in a criminal case against the former Managing Director of Bank PHB (now Keystone Bank), Mr. Francis Atuche and his former Chief Financial Officer, Mr. Ugo Anyanwu standing trial for theft.

The trial had lasted 10 years of fierce legal battle form the high court to the Supreme Court.

Justice Okunnu began the hearing at past 9 in the morning and surprisingly wrapped up the judgement by exactly 9.21p.m in the evening, many were frustrated as they could not leave the courtroom.

The duo were found guilty of 21 of the 27 counts of conspiracy and stealing charge proffered against them by anti-graft agency, the Economic and Financial Crimes Commission, EFCC, in 2011.

According to the prosecution team, the total sum of stolen money was in the range of N25.7 billion belonging to the bank.

His former Chief Financial Officer, Mr. Ugo Anyanwu standing trial alongside him was also sentenced to four years by Justice Lateefa Okunnu of the Lagos State High Court in Ikeja.

Atuche’s wife, Elizabeth standing trial with him was however found not guilty of two counts of conspiracy and stealing brought against her, Atuche and Anyanwu.

She was discharged and acquitted of the charges of conspiracy and stealing.

Following the conviction of Atuche and Anyanwu, they pleaded with the judge to show mercy in her sentencing upon being asked by the judge if they had any plea to make.

Atuche rose on his feet and said, “As a young man, everything that I did all the time I was the MD of Bank PHB, I gave my all to the bank, at no material time did it occur to me that I would set up a scheme to defraud the bank, it did not even occur to me.

“But I haven’t come to this point in my life before.”

“I plead for mercy, leniency, your kindness, and I plead that out of your kindness and generosity, you will not allow me to go to jail, I am truly sorry.”

He explained that he as a professional banker and chartered accountant, he certainly did not set out to become a convict.

“I leave it to your bossom to share the milk of kindness, that God will place in your heart to be kind and from the bottom of my life. I am deeply very sorry and today will be a truly point in my life. I am very sorry.”

His counsel, Mr. Paul Nneoma pleaded on Atuche’s behalf thus: “I will appeal to your Lordship for kindness. He is a first time offender.

“Naturally, for how much I have come to know him, he is disposed to helping people.

“I am also appealing to you, in order not to kill his career, he is a responsible family man who had never been convicted of any crime.

He further urged the court to give Atuche a fine instead of incarceration, in order to preserve his professional career.

Leaping to his feet, Anyanwu also began his plea with a sigh and said, “Your Lordship, I don’t know where to start but please pardon me if … (he paused for seconds) and continued, “The Lordship I am the only son of a Police Officer who died while I was only one year old.

“I grew up on the premise of hardwork. All I have done all my years is to work hard, it was not by deceit but dint of hard work.

He addded that, “In the last 10 years, I have suffered a lot.

“I am sorry if I appeared cocky in the witness box during my examination-in-chief. I have never been described as cocky in my life.”

But the judge interjected and said, “We don’t get personal in the court room.

“I have two kids who are barely teenagers. They look up to their father, and I wonder what kind of impact this will have on them, so I am sorry.”

“Whatever I have done was done while doing my work. I am sorry. Thank you, he concluded.

His counsel, Mr. Silva Ogwemoh, SAN, also pleaded for mercy on behalf of his client.

He said, “We are all begging for mercy but let me first of all say he has a child with a medical condition requiring special attention.

He also expressed that his client was hypertensive, asking the court to note that no one is aware of his status since COVID-19 virus has been ravaging the world.

He then added: ” My Lord has come to the conclusion that some of the defendants are guilty but my Lord still have power and discretion to decide on the form of sentence and with the support of my Lord, to impose a fine instead of a custodial sentence.

Citing reason for asking for a fine instead of imprisonment on the strength of legal reference, Anyawu’s lawyer noted that there had been an instance where imposition of fine was favoured in a cited matter.

In response to the pleas of the defendants, EFCC team led by Mr. Kemi Pinheiro, SAN, urged for a strict sentence as well as an order of restitution against the convicts.

He acknowledged that the judge’s judgement was deep, detailed and sound in the administration of criminal justice.

The lawyer made application for restitution pursuant to a legal point.

He argued that on the premise of law relied upon by the learned silk that there should be a fine, he said, “It won’t apply.

“There is no discretion, I urge your Lordship to go strictly with the law.

“The case is 10 years old. Because of their position they breached a trust. They were cocky and rude. It is on that basis, he (Anyawu) aligned with his boss instead of the State.

“Apply maximum sentence,” he said in his submission.

Earlier, the prosecution said that Lagos State Government spent much funds and resources prosecuting the case in the past 10 years.

He noted, “We were taken to the Court of Appeal, the Supreme Court several times by the defendants.

Justice Okunnu finally ordered that Atuche and Anyawu to go to prison for six and four years respectively.

In addition to prison terms, she ordered for restitution.

Said she, “I have considered this litigation for sentence and the plea.

“Certainly there must be consequences to serve as deterrent. The person of the first defendant abused his position of trust by stealing from the bank and persons.”

“By stealing from the bank, they stole from innocent customers of the bank running into billions of Naira.

“I hereby make an order of restitution against the first, second and third defendants to refund the sums stolen, stated in counts one to 11, 14 to 20 and 24.

“The sums are to be repaid to the Federal Government of Nigeria that recovered the funds on behalf of the bank,” she ruled.

The trial judge also held that in case of conspiracy and stealing against the 2nd defendant, the prosecution failed to prove any case against her.

She added that there’s no evidence that linked her to the offence.

In a statement on his Facebook page, Kyari confirmed that his squad truly arrested a suspect that Hushpuppi claimed was threatening his...
Read more
Crimes

Olumide Bankole Morakinyo, 38, a Canada-based Nigerian has been sentenced to eight years in prison in the United States for defrauding the...
Read more
Crimes