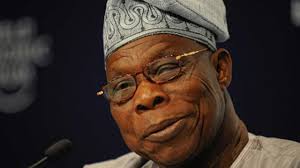 Former President Olusegun Obasanjo, yesterday, lamented the deplorable state of Nigeria, saying the country now flows with bitterness and sadness, rather than milk and honey.

Obasanjo expressed unhappiness that the country is not progressing as destined by God, stressing that Nigeria ought to be the leader of the black race.

The former president spoke at the unveiling of a book in his honour, titled “The Man, the General, the President”, authored by Femmy Carrena, former aide, at the Olusegun Obasanjo Presidential Library (OOPL) in Abeokuta, Ogun State capital.

Obasanjo said Nigeria was endowed with both natural and human resources to excel, but bad leadership has robbed the country of its position, not only in Africa, but the world at large. The former president, who expressed his worries that Nigerians usually perform- “fantastically well” outside the shores of the country, but seem to be under-performing when they are in the country.

He said: “As of today, we have five Nigerians directly running international organisations and running them very well, and one or two at the number two level.

“We have Akin Adesina running the African Development Bank (AfDB); we have Benedict Oramah running the Afrexim Bank; we have Mohammed Barkindo running the OPEC; we have my sister, Ngozi Okonjo-Iweala, running the World Trade Organisation (WTO) and we have Amina Mohammed who, I think, celebrated her 60th birthday, yesterday or day before yesterday, who is number two in the United Nations (UN). These are things that should give hope and encouragement for the future.

“The point is that, if these people are here in Nigeria, if you hear of them at all, we would have shackled them and made it impossible for them to perform as they are performing outside.

“And each of these people that I have mentioned are doing fantastically well. We even have Bankole Adeoye, who just took over as the Commissioner for Political Affairs and Peace and Security (PAPS) of the AU.

While lamenting the 14 million out-of-school children in the country, Obasanjo urged the leadership of the country to ensure education is provided for the children, saying “otherwise, Nigeria is breeding future Boko Haram.”

He added that education must take the forefront in order to put Nigeria on the right footing.