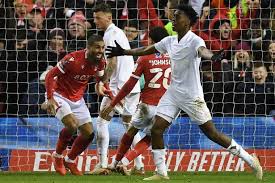 Arsenal became the highest-profile casualties of the FA Cup third round as the 14-time winners lost 1-0 at Nottingham Forest, but Liverpool and Tottenham Hotspur avoided early exits after scares against lower-league sides on Sunday.

Forest repeated their third-round win over Arsenal in 2018 thanks to substitute Lewis Grabban’s 83rd-minute finish.

Liverpool came from a goal down to win 4-1 against third-tier Shrewsbury Town, while Tottenham trailed until the 74th minute at home to third-tier Morecambe before winning 3-1.
A lacklustre Arsenal failed to muster a shot on target and could have no complaints about only their second third-round defeat in 26 seasons.

Forest more than matched their visitors and Grabban, surprisingly left on the bench at the start, made a huge impact as he stretched out a leg to convert a Ryan Yates cross and seal a fourth-round Midlands derby against top-flight Leicester City.
“I’m really proud of the boys, pleased with the performance. It’s brilliant to get through and I hope the players now really believe in what we’re doing,” said Forest boss Steve Cooper.

Arsenal boss Mikel Arteta offered a frank assessment.
“They won, they scored a goal and we didn’t. We were not good enough and we have to apologise for it,” he said.

Liverpool started with few first-team regulars and five youngsters and were behind in the 27th minute when Daniel Udoh slid in Nathanael Ogbeta’s cross from close range.

Substitute Roberto Firmino scored with a brilliant backheel in the 78th minute and Fabinho wrapped it up with his second goal in stoppage time, blasting in from a tight angle.

“When you get the first goal against you, so many things can happen but I liked the way we responded,” manager Juergen Klopp, who returned to the touchline after his recovery from COVID-19, told the BBC.

Shrewsbury manager Steve Cotterill said: “I don’t think it was a 4-1 game. But, once they got the third goal we probably weren’t going to get back into the game, being a realist.”