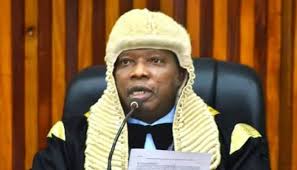 Ogun State House of Assembly says the amendment of the existing Local Government Law of Ogun State, 2006, will help to further reposition the local government administration for optimum performance by giving more deserved recognition and welfare to the workforce to boost their morale.

The Speaker of the Assembly, Rt. Hon. Olakunle Oluomo, said this during a stakeholders’ forum on the bill titled: ” H.B. No 58/OG/2021- A Bill for a Law to Amend the Local Government Law of Ogun State, 2006″ held at the Assembly Complex, Oke-Mosan, Abeokuta.

Oluomo explained that the legislation sought new designation for the Heads of Local Government Administrations (HOLGA) to be on consolidated salary similar to career general managers of statutory corporation, as well as acting as an accounting officer to the Local Government.

The essence was to further encourage the entire personnel at the local government level to be more committed, dedicated and proactive for effective and efficient service delivery to the people at the grassroots.

Recounting the unanimous support of the lawmakers in the 7th and 8th legislative sessions in the State to local government autonomy in the previous constitution amendments by the national Assembly, the Speaker expressed optimism for a more productive council system with a renewed assurance that the Ninth Assembly under his leadership was committed to the actualization of the autonomous local government administration.

Oluomo thereafter challenged the workforce in the 20 Local Government Councils in the State to further rededicate themselves to quality service delivery through the contribution of more feasible ideas and revenue generating strategies that would enable the councils deliver more democratic dividends to the people.

In her address, the Chairman, House Committee on Local Government and Chieftaincy Affairs, Hon, Bolanle Ajayi said the public hearing was organized to avail concerned stakeholders the opportunity to express their opinion and ideas on the new bill, with an assurance that the Assembly would ensure a speedy passage of the bill.

Taking turn to lend their voice in support of the bill, the Transition Chairman, Odeda Local Government and State Chairman, ALGON, Alhaji Bola Lawal, the HOLGA, Ewekoro Local Government Council, Mr. Olalekan Oderinde and the Director of Appointment, Training and Pension, Engr. Babatunde Odunlami, described the bill as a laudable initiative that would add more values to the local government service, noting that such would bring about button-up approach to development.

In his remarks, the State Commissioner for Local Government and Chieftaincy Affairs, Afolabi Afuape, noted that it was imperative for the councils to improve on their revenue as the State often augmented the renumeration of their staff with additional funds.

Contributing, the Director of Legislative Drafting, Planning, Research and Statistics, State Ministry of Justice, Mr. Olubankole Mafe, noted that the ministry would convey its position and assessment on the bill in relation to legal, management and financial implications to the Assembly in due course.