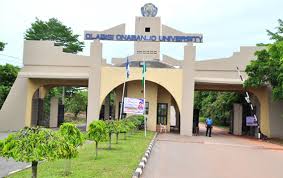 Olabisi Onabanjo University Ago- Iwoye, Ogun State has generated over N3.4bn out of its over N7.8bn revenue projection contained in the 2021 Appropriation act, while reeling out its budget performance between January and June.

The Vice Chancellor of the university, Prof. Ganiu Olatunde, represented by the Deputy Vice Chancellor ( Academics) Prof. Deji Agboola, disclosed this while presenting the budget performance of the institution before the members of the State House of Assembly Committee on Education, Science and Technology, led by Hon. Adeyemi Ademuyiwa.

Prof. Olatunde, explained that the revenue achievements represented 44% of the entire projection for the fiscal year, adding that the revenue was received from different sources including school fees, acceptance and subvention amongst others.

He seized the opportunity to assure students, who were having issues in reconcilliing their payments with the school in the course of their registration process, that their issues were being sorted out with the service provider promising that all genuine students would be cleared by the institution.

In the same vein, the House Committee has commended the management of the State Institute of Technology, Igbesa led by the Rector, Dr. Funke Akinkurolere for being the only State-owned institution that won the JAMB merit award as the most compliant institution.

The lawmakers also commended the school for adhering to the principles of standard financial accounting in all its record books.

Also, the House Committee lauded the management team of the Gateway ICT Polytechnic, Saapade, led by the Rector, Dr. Kolawole Oyeyinka, for high performance in revenue generation, as it generated over N799m representing over 95% performance within six months; out of N835m revenue target for the period.

Other institutions that presented their budget performance before the lawmakers included Tai Solarin University of Education which recorded N2.53bn of its N4.299bn into government’s coffers, while Abraham Adesanya ICT Institute, Ijebu- Igbo on its part, generated over N413.6m out of its N708m target.

This is just as the Gateway Petro- Gas Institute within thesame period, recorded N31.7m revenue representing 41.32% of its revenue target.

Ogun State House of Assembly through its Committee on Local Government and Chieftaincy Affairs in continuation of its budget assessment on Local government councils has challenged the council administrative heads, especially accounting officers to step up measures at ensuring an up-to-date financial records of their councils’ revenue and expenditure.

The Committee Chairman, Hon. Bolanle Ajayi, threw the challenge, while directing the management teams of Yewa South and Ogun Waterside Local Government Councils to re-present the records of their budget performance to capture and reflect all budget heads, especially revenue and recurrent expenditure between January and June, 2021.

The House Committee, while appraising the budget performance of Ado-Odo/Ota, Yewa South, Ogun Waterside and Imeko/ Afon local government councils presented by their respective Heads of Local Government Administration (HOLGAs) implored them to always give priority to the core needs of the people, especially health services.

Earlier, the HOLGA, Ado-Odo/Ota, Dr. Daniel Adesanya, reeled out the projects carried out by the council to include a block of two classroom with an office and a store at Joga, Ilogbo as well as construction of health centre at Arije, Ijoko, disclosing that the council generated N1.3bn from grant and independent revenue, with N23.19m expended on capital projects in the period under review.

On his part, the Acting HOLGA, Imeko/Afon Local Government Council, Badejoko Taiwo, submitted that a total of N610.65m was recorded as returns from Federation accounts and independent revenue, stating that N557.9m was expended on recurrent expenditure, with N6.46m on capital projects in the period under review.