Opinion: Nigeria Life Under The Gun 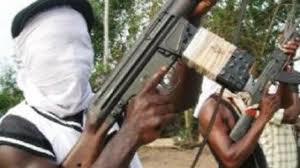 In the context of the present state of affairs in Nigeria, the closest metaphor for the country is the Hobbesian syndrome, where life for the average citizen is becoming uncertain, possibly brutish and short.

This is courtesy of the ambience of the widely acknowledged spate of mis-governance under the Muhamadu Buhari administration and attendant lawlessness which now reigns in the country. It was the 17th century English philosopher Thomas Hobbes who propounded the theory that in man’s basest animalistic state of nature, the absence of law and order engenders the preying on the weak by the strong, and survival of the fittest. In the country today, hardly a day passes without the public space from Lagos to Maiduguri and Sokoto to Calabar, being inundated with horrendous tales of multiple deaths at the hands of gun-wielding killers, who operate without let or hindrance.

With the unprecedented spate of heinous crimes, it is becoming a matter of every citizen standing in the line of fire of the assassin’s bullet, or close to the clutch of the kidnappers, with both scenarios mirroring the proverbial, hanging ‘Sword of Damocles’.

Indeed, at the risk of sounding hyperbolic, political ranking is now more determined by the rule of the gun which drives the public life of the country, with the iconic status of the firearm even in notoriety, so pronounced that the access to it or the company of gun-toting security personnel – either as state actors or otherwise, is now a status symbol.

Public figures from the national to local government levels, hardly appear in public without ‘adequate security’ which in ordinary parlance refers to the accompaniment by armed men or women who are ever ready for a ‘kill and go mission’. Private citizens with even the most pedestrian pretensions to affluence and visibility, imitate pubic officials to parade the same craving for ‘adequate security’, and carry often concealed weapons, just in case any contingency come up. Generally, the macabre sway of the rule of the gun has become so defining that with any instance of multiple deaths in the country, the first suspect is gun-fire, before consideration shifts to vehicular accident or building collapse, or any other contingency, as had been the case until recently.

Meanwhile, reflecting on the impact of gun-law on the Nigeria psyche, betrays its antithetical import for nation building. Under the reign of gun-law, dialogue beats a hasty retreat with the appreciation of the folly of arguing with a Nigerian armed with a gun. A rather ominous aspect of this dispensation is the concern that even the government seems to have adopted hook, line and sinker, the subscription to gun law, instead of dialogue as a first line response to sundry challenges of dissent over its style of governance.

An instance was the recent threat by President Muhamadu Buhari to visit mayhem on disenchanted members of ‘Project Nigeria’, which testifies eloquently to an unveiled show of impatience and trigger-happy disposition by the government. While receiving the Chairman of the Independent National Electoral Commission INEC) Professor Mahmoud Yaqoub recently, Buhari used the occasion to warn all secessionists seeking to leave the Nigerian federation, to expect mayhem from the government.

Worrisome as the situation is, history still teaches that hardly can the present state of affairs lead the country to any pretensions of greatness just as none of the great nations of the world was built on the basis of unbridled acrimony, belligerence and centrifugal tendencies among the citizenry or between them and their governments. Even when wars were fought by nations to bring their constituent parts together, the final charter of their collaboration was fashioned through dialogue and consensus built on mutual appreciation of their peculiarities. Yet this is a tendency which is seen as averse to contemporary Nigerian political power calculus.

That is why the present administration of President Muhanmadu Buhari needs to appreciate the need to vitiate the widening and deepening sway of gun-law across the country. Otherwise, it is merely superintending over the irreversible break-up of the Nigerian nation, and may have no one else to blame as the threat to its tenure and even the country’s unity.

Against the rash of flashpoints of crises across the country, any tendency by the administration that does not point towards a pacification of the aggrieved sections of the country qualifies as the unwise and wasteful act of throwing away with the shovel, what the country had gathered over time, with the rake.

Hence, except the government is eying any dividend that may accrue with the disintegration of the country, it needs to review with dispatch, its style of governance which is largely seen as undemocratic as well as divisive. Essentially, the disposition of the government makes a cross-section of Nigerians actually worry over whether it shares with them, fears over the break-up of the country, which for them is not an option.

In another dimension is the disturbing but growing brainwave by yet some traducers of the government that its inclination to trigger-happiness and slack commitment to fighting insecurity, may be geared towards a self-serving agenda of reaping from eventual widespread mayhem across the country, which could truncate the 2023 polls.

Trending contemplations in that direction on social media platforms are already swirling with permutations on how if the polls fail, a pliant National Assembly can invoke constitutional provisions to extend the tenure of President Muhamadu Buhari for intervals of six-months at a time, and even endlessly.

What and where Nigeria will be by then, given its currently progressing meltdown with the rash of flashpoints of armed conflicts across the country, courtesy of its betrayal by the political class, may remain a matter of conjecture for now.

Yet it ever remains of significant interest to the country’s military establishment, given their constitutional responsibility to safeguard the integrity of the nation, and not necessarily any particular administration.

To them, if no one else, Nigeria as a nation, comes first.