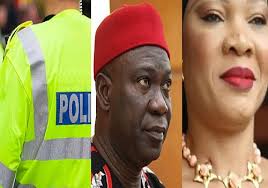 Ike Ekweremadu, former deputy senate president, and his wife, Beatrice, have been remanded in custody in the United Kingdom.

On Thursday, the UK metropolitan police announced that Ekweremadu and his wife were charged to court over the allegation of bringing a child to the UK for organ harvesting.

The UK metropolitan police said the duo were charged following an investigation by the police’ specialist crime team.

The police added that the investigation was launched after detectives were alerted to potential offences under modern slavery legislation in May 2022.

“Beatrice Nwanneka Ekweremadu, 55 (10.9.66) of Nigeria is charged with conspiracy to arrange/facilitate travel of another person with a view to exploitation, namely organ harvesting,” a statement by the police reads.

“Ike Ekweremadu, 60 (12.05.62) of Nigeria is charged with conspiracy to arrange/facilitate travel of another person with a view to exploitation, namely organ harvesting.”

The child was said to have “been safeguarded”, while the police added that its operatives “are working closely with partners on continued support”.

The couple appeared before Uxbridge magistrates’ court on Thursday.

Ekweremadu and his wife were, however, denied bail and the case was adjourned till July 7.

This story is published in partnership with Report for the World, a global service program that supports local public interest journalism.