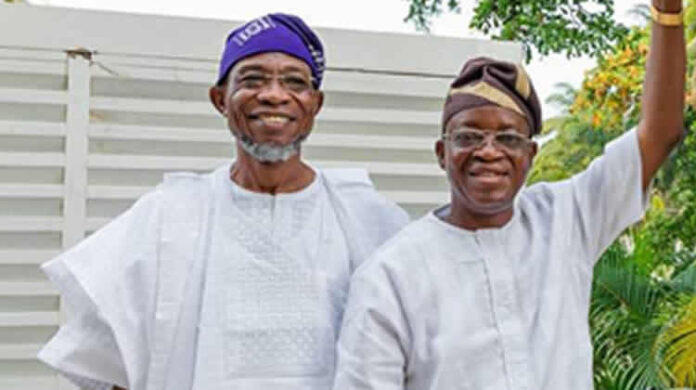 As the 2022 Osun State Governorship Election draws gathers momentum, there Prominent Politicians within the All Progressives Congress (APC) Precisely the Loyalists of Ogbeni Rauf Aregbesola, the immediate past Governor of Osun State who is also the incumbent Minister of Interior.

It’s no longer a news that there is a cold war between Aregbesola and his Successor, Governor Gboyega Oyetola.

As the much anticipated Election draws near, Below is a list of Four Prominent Loyalists of Aregbesola that may challenge Governor Oyetola for the APC Governorship Ticket.

1. Rt. Hon. Najeem Folasayo Salam: The 55years-old Businessman turned Politician is popularly known as Iwaloye within and outside Political Circles in the State.

However, In 2011, he contested and won a Seat in the Osun State House of Assembly under the defunct ACN platform. Hon. Najeem Salam won a re-election in 2015 and subsequently emerged as Speaker of the House, a position he occupied until May 2019.

He is currently the Executive Director, Marketing the Business Development of the Nigeria Communications Satellite Limited (NIGCOMSAT).

2. Senator Adelere Oriolowo Oriolowo, 64 was a Top Contender for the APC Governorship Ticket during the last Election held in the State. The Engineer turned Politician is the incumbent Senator representing Osun West Senatorial District at the National Assembly.

During the Aregbesola-led Administration, he occupied several positions including, General Manager of the Osun State Agricultural Development Corporation and later Permanent Secretary of the Ministry of Water Resources, Rural Development and Community Affairs, a position he occupied from 2013 to 2016.

3. Ambassador Rafiu Adejare Bello: The 59years-old Bello hails from Ede North Local Government Area of Osun State. He is currently the Nigerian Ambassador to the Republic of Mexico.

Adejare Bello was the Deputy Governorship Candidate of the People’s Democratic Party (PDP) during the 2014 Governorship Election. He later decamped to the All Progressives Congress (APC) shortly before the last Election held in September 2018.

4. Alhaji Moshood Adeoti: Staunch Loyalist of Ex-governor Aregbesola who may challenge Governor Oyetola for the APC Ticket is Alhaji Moshood Adeoti. The 67years-old Politician hails from Iwo, Ayedire Local Government Area of Osun State. Adeoti was the 2018 Governorship Candidate of the Action Democratic Party (ADP) during the 2018 Gubernatorial Election but lost to Gboyega Oyetola of the APC. He has previously served as Osun State Chairman of the Action Congress of Nigeria (ACN) from 2007 to 2010 and later Secretary to the State Government during the Rauf Aregbesola-led Administration (2010 – 2018).