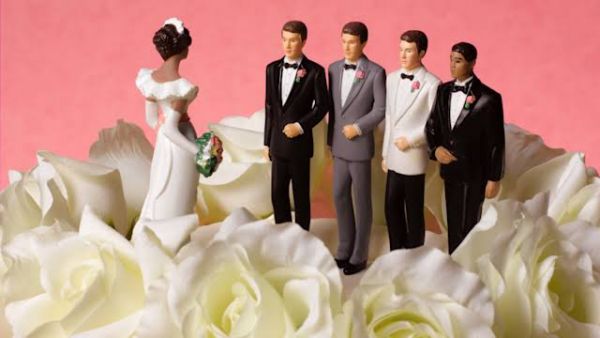 A proposal by the South African government to legalise polyandry – when a woman has more than one husband at the same time – has led to howls of protest from conservative quarters.

This does not surprise Collis Machoko, a renowned academic on the topic.

The objections are “about control,” he told the BBC. “African societies are not ready for true equality. We don’t know what to do with women we cannot control.”

South Africa has one of the world’s most liberal constitutions, embracing same-sex marriages for all and polygamy for men.

Businessman and TV personality Musa Mseleku – who has four wives – is among those opposed to polyandry.

“This will destroy African culture. What about the children of those people? How will they know their identity?” asks Mseleku, who stars in a South African reality TV show about his polygamous family.

“The woman cannot now take the role of the man. It’s unheard of. Will the woman now pay lobola [bride price] for the man. Will the man be expected to take her surname?”

Machoko researched polyandry in his country of birth – neighbouring Zimbabwe. He spoke to 20 women and 45 co-husbands who practised it, even though such marriages are socially taboo and not legally recognised.

“Polyandry, because it is shunned by parts of society, has been forced underground. The secrecy is similar to the one found in freemasons,” he said.

“When confronted by somebody whom they do not trust or do not know, they even deny that such a marriage exists. All this is because of fear of reprisals and persecution.”

Participants in Machoko’s study all lived separately but were committed to the polyandrous union and were open about it among themselves.

“One wife nourished the idea of wanting to be a polyandrous woman when she was in grade six [aged around 12 years] after learning about how the queen bee in a hive hosts many bee co-husbands,” the professor said.

When she was an adult she started having sex with multiple partners who were all aware of each other.

“Four of her current nine co-husbands were in that first group of boyfriends.”

In polyandry, the woman often initiates the relationships, and invites the husbands to join her union. Some pay the bride price, others opt to contribute to her livelihood. She has the power to remove a co-husband if she believes he is destabilising her other relationships.

Machoko said love was the main reason the men he interviewed said they had agreed to be co-husbands. They did not want to risk losing their wife.

Some men also referred to the fact that they did not satisfy their wives sexually, agreeing to the suggestion of a co-husband to avoid divorce or affairs.

Another reason was infertility – some men consented to the wife taking another husband so that she could have children. In this way, the men “saved face” in public and avoided being stigmatised as “emasculated”.

Machoko said he was unaware of polyandrous marriages in South Africa. Nevertheless, gender rights activists have asked the government to legalise such unions in the interest of equality and choice, as the law currently permits a man to take more than one wife.

Their proposal has been included in a document – officially known as a Green Paper – that the government has released for public comment as it embarks on the biggest overhaul of marriage laws since white-minority rule ended in 1994.

“It’s important to remember that this Green Paper sets to uphold human rights and we cannot lose sight of that,” said Charlene May, an advocate at the Women’s Legal Centre, a law firm that fights for women’s rights.

“We cannot reject law reform because it challenges certain patriarchal views in our society.”

While this has been largely welcomed by the communities concerned, the proposal to legalise polyandry has been condemned by clerics who hold seats in parliament.

“There will come a time when one of the men will say, ‘You spend most of the time with that man and not with me’ – and there will be conflict between the two men,” he added.

For his part, leader of the Islamic Al-Jamah party, Ganief Hendricks, said: “You can imagine when a child is born, more DNA tests will be needed to discover who the father is.”

‘Children of the family’

As for Mr Mseleku, he urged South Africans not to take the principle of equality “too far”.

“Just because something is in the constitution that does not mean it will be good for us.”

Asked why it should be any different for women, given he had four wives, he replied: “I’ve been called a hypocrite because of my marriages but I’d rather speak now than be silent.

“All I can say is that this is un-African. We cannot change who we are.”

But Machoko said polyandry was once practised in Kenya, the Democratic Republic of Congo and Nigeria, and it is still practised in Gabon, where the law allows it.

“With the arrival of Christianity and colonisation the role of the woman became diminished. They were no longer equal. Marriage became one of the tools used to establish hierarchy.”

Machoko said concerns about children born from a polyandrous union were rooted in patriarchy.

“The question of children is an easy one. Whatever children are born from that union are the children of the family.”

The Lagos chapter of the National Union of Road Transport Workers, locally called agberos, generates about N123.08bn annually, which could service the...
Read more
Article and Opinion

By judging on penis size we're feeding into patriarchal ideas of what it means to be masculine. In my...
Read more