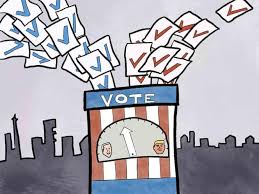 An opposition party candidate running for a municipal position in St Petersburg, Russia, is competing against at least two other people who not only legally changed their names to his, but also borrowed his physical appearance to confuse voters.

Russian opposition politicians are used to running against candidates with the same surname, it’s a commonly used tactic that can derail a few precious votes in close elections, but Boris Vishnevsky’s case stands out. A senior member of the liberal Yabloko party running for public office in a district of Saint Petersburg, Vishnevsky already knew that two of his opponents had recently changed their names to “Boris Vishnevsky” to confuse voters. What he didn’t know was that they’d stolen his look as well. In a district voting poster showing the three candidates side by side, it’s difficult to tell them apart, because they all look nearly identical.

“I have never seen anything like it. This is all done to disorient voters, so that they confuse the fake with the real, and instead of the real Vishnevsky they vote for one of the fakes,” the original Vishnevsky said in an interview.

This sort of “double” candidates is often seen during Russia’s election cycles, which can get quite close, despite the general expectation that Vladimir Putin’s party, United Russia, always dominates. It’s a shady tactic that ensures votes are split between two namesake candidates thus increasing another candidate’s chances of winning.

What is most shocking in the case of Boris Vishnevsky is that both his opponents changed their full names – one was previously named Viktor Bykov and the other Alexei Shmelev – to match his, and also altered their physical appearance to match his look. It’s unclear whether they also turned to digital editing software, but they are all balding, greying, and sport matching goatees. The only way to tell the real Vishnevsky apart from the doppelgangers is by his tie.

The original Vishnevsky labeled his opponents’ tactics as “political fraud”, but according to Russian law, it’s perfectly legal for political candidates to change their names to that of their opponents, just months before an election, so there isn’t much that he can do about it.

The liberal candidate said he didn’t know his rival’s motivations for posing as his doubles in the upcoming municipal elections, but added that he “doesn’t think they agreed to embarrass themselves like this for free”.

According to Russian media, the Russian Central Election Commission declared itself outraged by Vishnevsky’s double candidates, but made it clear that they would not be removed from the list…

It was wild drama at Gombe Magistrate Court when two lawyers descended on each other with blows while arguing a motion for...
Read more
Entertainment

Tonto Dikeh, the Nollywood actress, has called out Prince Kpokpogri, her estranged lover, over allegations of extortion and...
Read more
Politics