Prophet Weds Four Members of the Church at Once, Says Polygamy Is Not a Sin 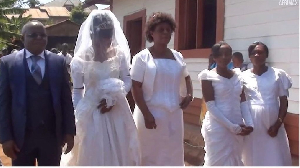 Four virgins were wed by a Congolese prophet in a vibrant ceremony in the east of the country.

According to sources, Prophet Zagabe Chiluza married the first spouse before tying the knot with the other four, using Jacob’s four wives as an example and claiming to have accepted polygamy from the Bible.

According to AfriMax English, the man of God always shares Holy Book scriptures to prove polygamy is not a sin. I already have one wife, and today I’m marrying these four. On his wedding day, he said, “They will join the first wife.”

He claimed that the concept of marrying more wives came from the Bible. “Leah and Rachel, then Bilha and Zilpa…four wives for one man,” he explained. Zagabe said he was saved in 1986, and while addressing the guests at the wedding, he said, “I’m glad to have five wives.”

The man of God encouraged others to practice polygamy, claiming that men in his church only marry virgins.

Zagabe Chiluza’s four wives, according to reports, were all virgins when he married them at his church in eastern Congo.