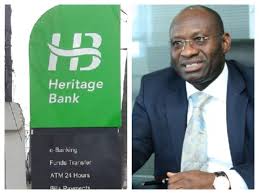 Some staff of Heritage Bank have allegedly protested at the Abuja residence of Senator Andy Ubah over debts they claimed he has owed the bank for some years.

This was confirmed in a video circulated over some social media platforms on Monday.

One of them, whose voice was captured in the video, said, “We are at the Abuja residence of Senator Andy Ubah for a peaceful meeting because he has been owing the bank for a couple of years now.

We are here to ask him to kindly repay the loans, which are depositors’ funds. If the loan is not refunded, it will throw the staff of the bank out of job, which will affect their families.”

However the question that remains on the nind of investors and customers is why the show of shame? If collateral is involved, why do they need to storm his residence?

The recent development has caused panic amidst customers who are of the opinion that there money and valuables aren’t safe with with bank.

In recent times in Nigeria, it has become a thing of norms as MD of Nigeria Banks do give out loans to people without collateral, a much more reason for collapse of many institutions in Nigeria..

Heritage Bank staff (Abuja) gathered at Senator Andy Uba’s House for a peaceful “meeting” over outstanding loans.
The Senator is running to be Anambra Gov… pic.twitter.com/9jDHizv0Dn

What they are saying

Efforts to get the response of the bank to the development proved abortive, as the spokesperson was not available for comments.