Risk Taker: Untold Story Of How Tobi Amusan Secure A Loan Of $50,000 To Make Nigeria Proud 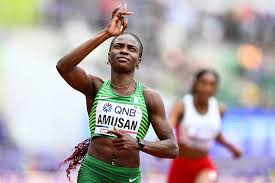 “Whom did you go to see? A reed swayed by the wind?”

It is 3 am, and people in Nigeria are oblivious that their representative, Tobi Amusan, is about to make history at the World Athletics Championships, in Oregon, USA, for the second time in less than 24 hours. Amusan, who had just shattered the 100 metres hurdles world record in the semi-finals of the event, after winning by 12:12 seconds, is in the race for the finals but most Nigerians are fast asleep – and for perceived good reason.

The hardworking Amusan had until the World Athletics Championships never won a medal in the competition or at the Olympic Games. At best, she emerged fourth. Yet, among a few hopefuls, her name rang a bell. In mid-2021, Amusan had run at the Olympics trials of the Athletics Federation of Nigeria hoping to beat Gloria Alozie’s 23-year-old record when it was discovered that the electronic timer had failed to read.

Hoping to just finish in this race and with her eyes on the target, she crossed the finish line in 12:06s. The sleeping nation was awakened with chants of victory.

To fans listening to the rendition of Nigeria’s national anthem as tears trickled down her face as she stood on the podium at Hayward Field, it was a huge win. But for Nigerians, Amusan is their bragging right. Something good was finally coming out of Nazareth.

Jamaican athlete and former 100m hurdles world champion, Danielle Williams, who finished third in the 100 metres semi-finals in which Amusan obliterated the competition on her way to setting a new world record, disclosed that the Nigerian knew she would set a new mark even before the championship began.

Reacting to Amusan’s feat, Williams, who could not make the podium in Oregon, said: “I ran the greatest race of my life and so, if I don’t make the final, I am satisfied because I know I gave the best I had today.

“The race was wicked. Tobi literally spoke it into existence. Just last night, I was watching on Shanice’s Instagram … they have a wall that says ‘only the best of athletes’ and on Shanice’s page I saw a little snippet of what Tobi wrote: ‘Incoming world record holder.’

“To see it unfold today is amazing. I am proud of Tobi. Definitely, she can speak things into existence.”

This would not be the first time that Amusan will call her victory into a reality. In a now-viral post from November 2016, she wrote: “Unknown now, but soon I will be UNFORGETTABLE … I will persist until I SUCCEED… (emojis of world, star and pin)”

As a 15-year-old, Tobi Amusan caught the attention of the people in her community in Ijebu Ode, Ogun state, in southwest Nigeria after she beat the competition to clinch the top spot in a 100m sprint at an inter-house sports competition.

In 2013, at 16, she represented Nigeria at the African Youth Championships in Warri where she got a silver medal in the 200m.

Then followed a trip to Ethiopia in 2015, where she won gold at the African U20 Championships, followed by a breakthrough victory at the All-African Games in Brazzaville, Congo.

By 2016, she would be awarded a scholarship to the University of Texas at El Paso (UTEP).

Her manager and former fellow trainee, Abiola Onakoya, who is also responsible for influencing this decision to the US, tells Guardian Life that this was spurred out of the desire to see that no one has his experience at the university where he was told to choose between being a “sportsman or face his studies” after representing the school in a competition.

“I know it is really difficult for Nigerian athletes to combine education and sports because the Nigerian government has not created that platform for us. So I decided that if there is anyone that wants to focus on track and still wants to go to school, then I’m going to help. I wanted them to understand that there is a place where you can combine your academics and still focus on what you want to do.”

After selecting athletes from the Eastern part of Nigeria, he turned to his people. His first port of call was Amusan. Faced with resistance at the beginning, especially from her father, he notes that like every Nigerian parent, “a lot of emphasis on perfection is placed on the girl-child.”

As such, Amusan’s parents wanted her “to go to school because they believe that the easiest way to get out of poverty is through education.”

To gain the trust of her father, Abiola signed an undertaking to ensure she “graduates from school, not turn to a prostitute and no one will take advantage of her.”

As remarkable as it may sound, there have been psychological and financial hurdles that she has had to surpass.

Shortly after deciding to turn pro in 2016, after opting out of her track and field academic scholarship at UTEP, Amusan’s daring decision put her in a dilemma, prompting her to ask Onakoya “what if things don’t go the way we plan?” Speaking to Guardian Life, he says, “I told her it is not when you lay the foundation of the house that you complete it the next day. Let us trust the process.”

This process would be tested by passionate individuals who opined that her choice of coach, Lacena Golding-Clark, a gold medallist for Jamaica at the 2003 Commonwealth Games and assistant coach at her university, was not good enough. Amusan would also experience the pressure to change her coach again at the competition after some Nigerian delegates shared the same opinion as they argued that “she can never be a medallist on the global stage with her coach who is from a small town in Texas.”

A few hours after her win, American-born track legend Michael Johnson suggested that the timer may have been wrong. To this, Onakoya responded, “you will not bring such humiliation to a lady who just made a huge impact in the world. Where was he when Sydney McLaughlin won the women’s 400m hurdles with a world record time? He is respected but that was a blow below the belt for his comment.”

Addressing another allegation that it was her shoes, the Adidas Adizero Avanti shoes meant for long-distance runners that aided Amusan’s win, Onakoya alluded this to racism and the unbelief that a Nigerian girl can break the world record.

“The most interesting thing is, she didn’t just run that race in the semi-final; she came back to the final and ran faster. She distinguished herself. Like ‘hey, we might be running the same race, but right now, we are not in the same class,’” he said proudly. “That is what hard work and persistence give because talent without hard work leads to failure.”

Besides these, not many know that she had to secure a loan of $50,000 to prepare for this competition that has now shot her to world fame.

This risk, alongside the other preceding events, Onakoya argues, cumulatively added to the overwhelming feeling on the podium.

“When you think about all the hard work, the practice, the sleepless nights, the visits to the doctors, chiropractor masseuse, just to make sure that everything comes together at the right time, and when you think of the 200 million Nigerians who are looking up to you at that moment, it’s quite emotional and seeing that for once, after Atlanta 96, at the global stage, she can stop the whole world to listen to Nigeria’s national anthem…what you saw were tears of hope. It was tears that make every Nigerian girl believe that if they can dream it, they can achieve it.”

As a way to give back, Amusan and Onakoya kicked off the Tobi/Abiola Grassroots Sports Development Foundation for secondary schools in Ijebu Ode, Ogun state this February to encourage children to become enthusiastic about sports and discover the next track star. With plans underway on another event by the foundation, Amusan’s new world record “is a clear indication that this is Ijebu to the world and is the hope that there is a future for the girl-child in our country.”

Despite being a world record holder, Amusan is without consistent training grants from her country. She hopes that this investment in herself, as well as other athletes, will inspire the government to focus on improving the foundation of athletics in Nigeria. This may prove difficult as Sunday Dare, Nigeria’s Minister of Youths and Sports Development has been enmeshed in controversies surrounding the inconsistencies in the country’s sports sector.

“If the government can create an enabling environment for us to execute all the plans we have for taking sports to schools. We want to inculcate the belief that a student can go to school and still excel in sports,” says Abiola.

“Moreover, there is no reason why the government should not support professional athletes. If we can have a good structure on ensuring athletes are well remunerated, it is going to change the face of sports in Nigeria entirely.”

It is clear that Amusan is just getting started. On her part, she is actively working on her vision to turn around the dynamics of sports in Nigeria, but first, in Ijebu Ode.