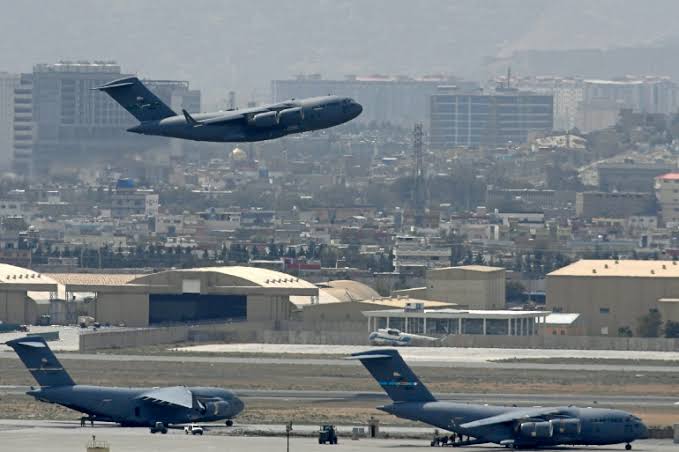 EaglesPath Online reports that Taliban fighters fired their guns into the air in celebration in the Afghan capital as the United States completed the withdrawal of it forces from Afghanistan, nearly twenty years after it invaded the country following the September 11, 2001 attacks on America.

According to Al Jazeera, Marine General Frank McKenzie, the head of the US Central Command, made the withdrawal announcement at a Pentagon news briefing on Monday, after the last troops sent to evacuate Americans and Afghans at risk following the Taliban’s return to power flew out of Kabul.

“I’m here to announce the completion of our withdrawal from Afghanistan and the end of the military mission to evacuate American citizens,” McKenzie said.

The Taliban hailed the departure of US troops, describing it as a “historic moment”, declaring that Afghanistan has now gained “full independence”.

The final flight took place under heavy security following two attacks on the two-week evacuation operation by Islamic State Khorasan Province (ISKP) – one a suicide bombing that left at least 175 people dead, including 13 US troops.

The spokesman of the Taliban government, Zabihullah Mujahid, and his troops are reportedly entering Kabul Airport, where he is expected to hold a press conference.

Images posted on social media posts showed Zabihullah and his group entering the airport on Tuesday morning, where they are expected to make some important announcements.

An opposition party candidate running for a municipal position in St Petersburg, Russia, is competing against at least two other people who...
Read more
Crimes

Operatives of the Economic and Financial Crimes Commissions have arrested 56 suspected fraudsters in a sting operation at the Ogun State Government’s...
Read more