‘The closest thing I’ve seen to hell’: U.S. veterans fighting in Ukraine describe heavy losses in the battle against Russia 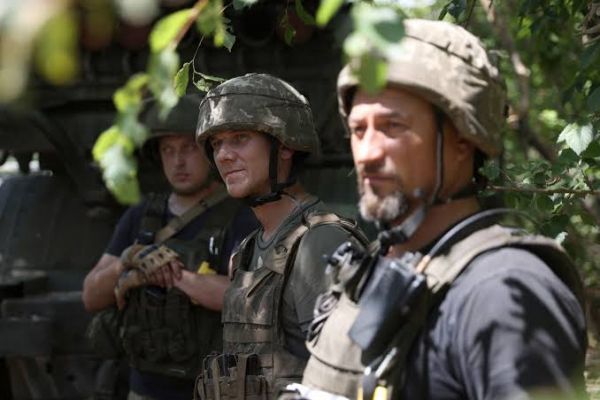 After a thrilling first few months of unexpected success that boosted morale among the Ukrainian ranks, the reality of the bloodiest European conflict since World War II has taken its toll among some of the thousands of foreign fighters who traveled from abroad to battle the Russian invaders.

The war has long moved past the Ukrainian victory in Kyiv’s suburbs, which are still scarred by the mass graves and blown-out buildings of the Russian occupation. Instead, after months of battle, soldiers push for excruciatingly incremental gains from trenches in the grassy plains and farm fields of the country’s east and south.

Round after round hits near Ukrainian lines, filling the air with dirt, sand and ash and forcing soldiers to burrow into deep trenches. As Ukrainian troops wait for an opening or calculate the position of a potential target, explosions resonate around them with regular thuds — sometimes for 12 hours at a time. The seeming randomness of the strikes intensifies the feeling among some that survival might come down to sheer luck.

An American fighting for Ukraine who served in the U.S. Army with combat tours in the Middle East described the constant Russian bombardment of the city of Severodonetsk in Ukraine’s Donbas region as “the closest thing I’ve ever seen to hell.”

Ukraine Armed Forces estimate that Russia is using eight times as many artillery munitions each day, firing thousands more shells than the Ukrainians and stymying their efforts.

The Ukrainian losses have been steep: as many as 100 to 200 casualties per day at the worst points in the war, according to Ukraine’s own estimates. These brutal losses have eroded morale within the ranks and in other units, five non-Ukrainian soldiers said in interviews over the past month. Four of the soldiers have not made their identities public and asked that their names not be used out of concern for their security and so they could speak freely about their experiences.

“The number of people that are upset and have low morale has increased, and that’s partly because of the way the Russians have chosen to fight,” Ripley Rawlings, a retired U.S. Marine Corps lieutenant colonel and author, who is supplying foreign fighters in Ukraine through his U.S.-based organization, Ripley’s Heroes, said.

Rawlins, who traveled to Ukraine recently and is sending scopes and goggles to trucks and e-bikes to the troops there, said that “about half of the units that we support have taken terrible hits lately.”

Despite the challenges, fighters who spoke to NBC News remained adamant about their commitment to pushing out the Kremlin’s forces. The soldiers admitted, however, that supply shortages, delays in receiving weapons promised by the West, and communication frustrations have challenged their spirits after months of battle.

Other common complaints included that counter-offensive strategies were undermined by older Ukrainian commanders sticking to Soviet tactics. They also noted poor communication among groups, with one soldier highlighting the lack of “a centralized unit that has everybody by the tail and knowing where people are.”

The Kremlin alleges that there are no longer any foreign fighters in Ukraine and that any who remain are mercenaries. Ukraine’s International Legion, meanwhile, said that its soldiers must follow the same disciplinary rules as other Ukrainian soldiers. They are also paid at the same rate: around $500 per month, depending on rank, with the opportunity for bonuses.

Thus they are owed the same treatment as any Ukrainian soldier if captured, said Damien Magrou, the legion’s spokesperson.

Magrou, a Dutch lawyer and a corporal in the legion, said at a news conference this month that Russian disinformation has negatively affected the group’s recruitment, reputation and fundraising, and he told NBC News on Wednesday that because of recent challenges they “are exploring avenues to widen our recruitment.”

As of now, legion members are required to have live combat experience and must pass background checks and a psychological exam to join. Citing security concerns, Magrou declined to say how many soldiers were in the legion or the number of casualties.

“There’s been a gradual dip in the number of arrivals over the course of the last few months, which isn’t very surprising given that attention in Western media has shifted elsewhere and the more motivated fighters made their decision in the beginning,” Magrou said over WhatsApp.

Magrou has said previously that more than 50 nationalities from every continent are represented in the legion and that former soldiers from the U.S. and U.K. are the most common. The Transatlantic Dialogue Center, a Kyiv-based think tank, estimated that more than 20,000 people have joined the International Legion, though it is unclear how they arrived at that figure.

Many of the soldiers who spoke to NBC News said they initially joined to help train Ukrainians after seeing the early, bloody images of the war online and ended up joining the fight. Despite recent hardships, they all shared that they are beginning to see promising signals that Ukraine is working to address its weaknesses.

Increased focus on training has made the once disorganized bands of Ukrainian volunteers into effective soldiers, and cycling out units on the front more often has helped keep soldiers fresh. Two soldiers said that they are seeing greater collaboration between units, particularly near Russian-controlled Kherson and Ukrainian-held Mykolaiv — two cities in the south that have been at the center of the fighting in the region.

“We’re so close it’s like we can almost see Kherson, and so we’re making the moves necessary to make that happen,” one fighter said. “We have all these groups that have worked together in their own areas, but we’re bringing it all together now. It increases our ability on the battlefield on a larger scale. It’s, like, pretty cool.”

That effectiveness on the battlefield appears to be buoyed by the American-made High Mobility Artillery Rocket Systems, or HIMARS. The arrival of high-powered military equipment promised by Western governments took months, but the recent success of the HIMAR systems has expanded Ukraine’s missile range and allowed them to strike well into Russian occupied territory.

The Pentagon committed to sending four more systems on Tuesday, which would bring the total number in Ukraine to 16.

The American fighter who was in Severodonetsk said he and his unit were trapped in a trench for 14 hours on the front in Ukraine’s east due to constant Russian shelling, but the next day they could see a clear horizon thanks to the truck-mounted long-range rocket launchers sent by the U.S.

“Every single one of those artillery positions was destroyed, and there were no artillery barrages all day,” he said. “The Russians got it back up and running because they seem to have an endless supply of s—, but those weapons, man, they’re a game changer.”

Still, none could ignore the recent reports of foreign soldiers captured, killed and sentenced to death by Russian proxies. From the U.S. alone, the State Department has confirmed the deaths of two Americans who traveled to Ukraine to join the country’s defense and the capture of two Americans — Alexander John-Robert Drueke and Andy Tai Ngoc Huynh. Another American fighter is still missing.

A New Zealander fighting on Ukraine’s southern front who asked to be identified by his nickname, Obi-One, said he and his unit of international soldiers write the names of killed or missing foreign fighters on the side of Javelin missiles before they fire them at the Russians’ tanks and other vehicles.

“We go hunting targets or looking for an opportunity to see if we can do something in memory of those poor guys,” said the New Zealander, who served multiple tours in Iraq. “It just pisses us off.”

The State Department said Drueke and Huynh were imprisoned by the so-called Donetsk People’s Republic, or DPR, a separatist group in Ukraine under the thumb of Russia. Fighters who spoke to NBC News said they are waiting for Drueke and Huynh to face the same “sham trials” and Russian “kangaroo court” that sentenced Moroccan Brahim Saadoun and British nationals Aiden Aslin and Shaun Pinner to death by the DPR.

The DPR has appeared to take charge of foreigners who are captured, which the Organization for Security and Co-operation in Europe recently called “an alarming phenomena.”

“The reason these trials are happening out there in the public is as a deterrent against other foreign fighters joining, and so countries have to reach out, recognize and negotiate with these separatists,” said Jeffrey Edmonds, who served as the director for Russia on the National Security Council in the Obama administration.

“Given the severe manpower problem the Russians have, these guys joining with three, four, five tours in Iraq are having an outsized impact. I think Russia is concerned and sees a need to deter them by saying, ‘If you come over here, you’re not going be treated under the norms of the Geneva Convention,’” Edmonds said.

While the foreign soldiers said they were committed to the fight, all openly discussed their intent to never be captured by Russian forces, even stating that they would prefer death — though one fighter admitted that these statements could be bluster.

One soldier, a U.S. Army veteran, claimed he kept a small hand grenade hidden on his person with a string tied to it, and he planned to pull it if he was ever in danger of capture. Others talked of running at Russian soldiers with a knife if they ran out of ammo or said they carried an extra bullet in a separate pocket “just in case.”

“I always told my guys don’t get caught fighting because they’re going to do some dastardly s— to you,” said James Vasquez, a former U.S. Army staff sergeant who fought in Ukraine and is now planning his return to the front after selling his Connecticut home. “That’s probably especially true for me because my face is out there, but you got to be ready to go out.”