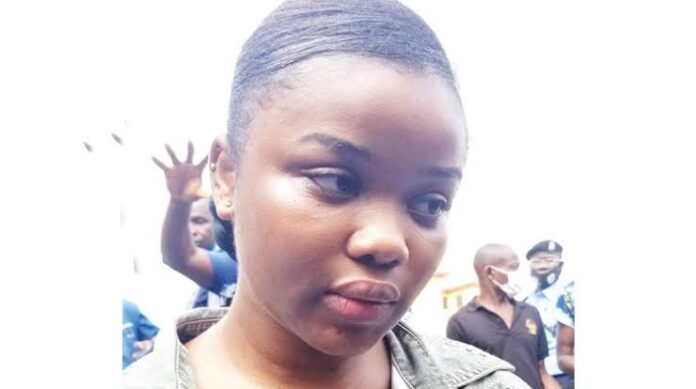 Eaglespath Online reports that Chidinma Adora Ojukwu, 21-year-old undergraduate of the University of Lagos who was alleged to have stabbed the Chief Executive Officer of Super TV and a Director in Super Network, Usifo Ataga, to death has made a U-turn on some of the statements she made some weeks ago.

We recall that the Lagos State Commissioner of Police, Mr. Hakeem Odumosu paraded Chidnma at the command where she confessed to killing Ataga after he made some advances towards her and tried to forcefully s*x her.

In an interview with Crime Fighters, she stressed that she had nothing to do with the death of Ataga because she wasn’t in the apartment when he was attacked or died.

She confirmed her relationship with Ataga, as well as her meeting with him at the service apartment. She explained that the next day, Ataga woke before her and requested that she gets whatever they needed that morning.

According to her statement, the door was locked on getting back, then she opened only to meet Ataga in pool of blood. She also confirmed taking his card and changing her clothes.

A court in Lagos sentenced 10 men to 12 years in prison on Friday for kidnapping the crew of a Chinese-flagged merchant...
Read more
EPTv

Obi Cubana: The Mystery Of How He Made His Money (Video)

Chairman of Cubana Group, Obi Iyiegbu, popularly known as Obi Cubana, has revealed how he made his first million naira, stating that...
Read more
Entertainment