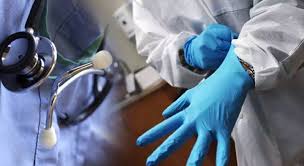 Nigerian doctors in their hundreds, on Tuesday stormed the Ladi Kwali Hall of the Sheraton Hotels, Abuja, as a consultancy firm, Meeds Consultancy, commenced interviews for those willing to work in Saudi Arabia.

The firm organised the interview on behalf of the Saudi Arabia Ministry of Health.

Medical doctors in various fields such as anaesthesia, ICU, paediatrics and surgery, family medicine and others stormed the venue as early as 6.45am.

Our correspondent noted that as of the 7am scheduled commencement time, those who arrived at the large hall had a hectic time to get seats.

Some of the doctors, who spoke to our correspondent, lamented the poor conditions of service, poor investment in the health sector, inconsistent salary payments, among others.

A medical consultant, Ahmadu Balarabe, who works at a teaching hospital in the North-West, stated, “Look around you, I am sure you can see old people here. This is the situation we have found ourselves in this country. We cannot continue to work in a degraded health system.

“Let us even talk about the NARD strike. These young doctors have been on strike and the next thing the government does is to sue them. Where is this done?

“Most of them (government officials) don’t care about the sector, because they know they can disappear to foreign countries. Well, we are also going to join them.

“I have some of my fellow consultants with several years of practice, who are also here to try their luck.”

Another medical doctor, Vivian Okolo, said, “Concerning the number of doctors here, I am heartbroken. When I came in here, I wanted to cry. Over 90 per cent of the people you see here are consultants.

“Consultants are the ones who train resident doctors. When they leave, who will train the upcoming doctors? But you can’t blame them, because we all are looking for better conditions of service.

Another medical doctor, Femi Jaiyeola, blamed the Federal Government for the large turnout of doctors willing to migrate.

He said, “One of the persons we met when we came in said they were expecting close to 600 doctors. The government is to be blamed for this.

“Someone even asked me if I was not scared of going to an Islamic country since I am a Christian. I told him even Ehanire (Minister of Health) will come here if he has the opportunity. Saudi Arabia is offering more than we can ever earn in Nigeria.”

Another doctor, who did not want her name in print, said the only way the government would attend to the issues in the health sector was for the citizens to march to the seat of power.

She stated, “When Nigerians are ready, they will march to Aso Rock and demand responsibility from this government. The President travels out to take care of his health, meanwhile the health sector is dying back home.

“The interview is a week-long process. Today, as you can see, we are filling forms. There are other processes. I have not been briefed yet, but we have been told that the process is for a week.”

Our correspondent also spoke to a staff member of the consulting firm, who said this was not the first time they were recruiting for the Saudi authorities.

He said, “They know Nigeria has one of the best doctors in the world. Our doctors are well-valued outside the country. So, don’t blame anyone for leaving.

Vice-President, Nigerian Association of Resident Doctors, Adejo Arome, in an interview with The PUNCH, said, “I must truly commend the large number of individuals who came out. We have always encouraged people to look out for other options.

“The Nigerian government does not care about the welfare of doctors; so, the best thing to do is to look out for other opportunities and I am glad that people are gradually seeing the light.”

The Senate has passed a bill seeking to control and manage sickle cell anaemia, a genetically inherited disease in Nigeria.
Read more
Health

The Lagos State Government through the Office of Public Private Partnership in conjunction with the Ministry of Health has concluded plans for...
Read more

Some hours ago, the federal government named some universities and declared them as Illegal through the National Universities Commission.
Read more
Load more