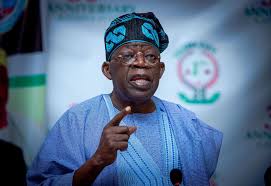 But Abibatu Mogaji (RIP) Tinubu’s mother was a rich woman right from her youthful age as a successful trader, so how come his brilliant son, Tinubu, was so poor to attend Pry & Sec. schools? Inferring from Alake’s lies of many colours on television.

Ok, granted that Tinubu studied at home because he was too poor or there were not enough schools then for him to attend, at least he must have sat for exam as a correspondence student. Dele Alake should have told us what exam Tinubu wrote and which “correspondemce certificate he used to gain admission into Chicago state university. Was it GCE London or West Africa or Cambridge O’Level or which? Or the brilliant” Ajantala” boy who studied at home just walked into the university just like that and was given admission without submitting any certificate? That’s interesting No university would do that 70 years ago.

All this Alake’s tale by moonlight negated Tinubu’s earlier claim by affidavit in 1999 of attending St. Paul’s Primary School, Aroloya Lagos and Government College Ibadan which had been disproved.

I don’t know what Alake wanted to achieve by telling us that Clinton was not ex-president Clinton’s father’s name but of his stepfather. Well, may be he wanted us to make deductions from his rabble rousing, lies or half-truths. Is he suggesting that there must have been name change or identity theft along Tinubu’s life trajectory? Hence the aggression, volte-face, unnecessary diversion, antics and subterfuge to defend and defend him with uncoordinated lies and “may bes”. You do not sell a good product with “May Be” you give full details willingly.

Issues in politics and leadership start with identity, character and integrity, even in matrimonial relationship, employment and friendship Tinubu spokesmen, sychophantic followers and marketers should be honest and consistent with one line of lies, repeat it severally may be it can sound true one day to dumbest ears instead of potpourri of variegated lies which make them to look stupid always.